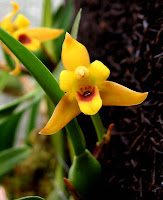 Can you imagine an orchid that smells like freshly cut cedar and oak lumber mixed with caramel? Well, that’s what the flowers of Maxillaria variabilis smell like. It’s a small plant, at least each growth is small, but it quickly spreads all over its growing surface. Mine grows on a big tree fern slab, and has fairly quickly gone from just a tiny cutting to a large clump. The plant itself has flattened, oval-shaped pseudobulbs with a thin leaf or two on top. It’s not particularly attractive when out of bloom, but it can be spectacular when covered with flowers. It’s blooming now, with the flowers arising on short, stubby stalks from the base of the pseudobulbs. I have three varieties, one yellow, one orange, and one so dark red it’s almost black. Regardless of color, they all smell pretty much the same, with wood and caramel notes along with just a hint of toasted coconut. One of these days I may make a perfume based on Maxillaria variabilis, since it’s one of the more unique flower scents out there. 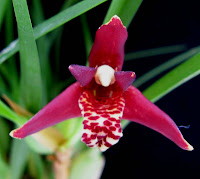 Now imagine an orchid that smells exactly like coconut-scented suntan lotion. That would be Maxillaria tenuifolia, another orchid that’s blooming right now, filling the greenhouse with the fragrance of coconut. The plant isn’t very attractive, with its stacked pseudobulbs topped with leaves like long, fat, dark green pine needles, so it’s unwieldy and prickly when out of bloom. However, it puts on quite a display when it’s covered with its velvety, deep red flowers with white polka-dotted lips. I have two plants that I use for breeding, nicknamed “Bain de Soleil” and “Coppertone”. There would be no point in making a Maxillaria tenuifolia perfume since it’s already been done unintentionally many times over, but it is always fun to smell the coconut orchid in bloom.

I think a lot of people don’t realize what a huge variety of fragrances orchids can have, but these two Maxillarias are perfect illustrations of orchids with strong but unconventional “orchid” scents.
Posted by Doc Elly at 9:32 AM