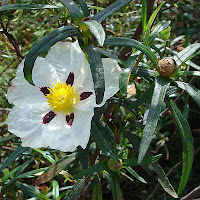 Cistus shrubs are native to the Mediterranean, and secrete a sticky resin that’s been used in perfumery for millennia. It’s one of those archetypal scents that many people dislike because they conjure up visions of our remote human history, our animal instincts, and all of the well-repressed scents and associated emotions that our modern, well-scrubbed, quasi-puritanical Western society tries to avoid, preferring instead light, “safe”, synthetic scents that have little association with raw nature. 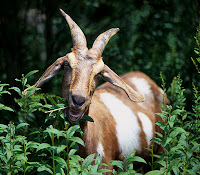 Back in the old days, labdanum resin used to be harvested from the hair of goats that foraged among the Cistus bushes, unwittingly performing a service to perfumers as they dined, so the goat association has some basis in fact. Of course, it’s not done that way any more, but the plant’s own animalic notes are still there in the pungent resin. The raw resin is a dark greenish-brown, and has a very earthy, plant-like scent. I use the least refined, green absolute in compositions where I want a dark, earthy note without too much of the strong, resinous, perfumey aspect. An extra step of refining produces a clear absolute that I love to wear as a perfume just on its own when I’m in need of a special treat. It is a powerfully resinous scent that’s like dried pine rosin, but with fruity, musky, leathery notes that pop out more clearly than they do in the green version.

Steam distillation of the resin produces a powerfully fragrant, orange-colored essential oil, generally sold under the name Cistus, that has less of the resinous aspect and more of the fruity, “perfumey”, musky, animalic notes. I have found considerable variation in the oil from different sources, with each having its own use.

If you have not smelled labdanum or cistus, the scent is impossible to describe adequately since it is unlike anything else, a common theme with variations. None of the Cistus absolutes or oils come cheap, but fortunately a little goes a long way, and the effect in a perfume is worth the expense.

I will give away a sample of one version of Cistus to two people who comment here. Just leave a comment saying which version you think would be most appealing to you - the absolute or the essential oil. If your name is drawn you will receive a 1-ml sample of that version diluted to perfume strength. If you have not smelled Cistus by itself, this is your opportunity. You may love it, you may hate it, but at least you will have experienced it, and it may help you recognize it in perfumes.

I've just done the drawing, and the winners of the labdanum samples are Laurie Brown and Diana. You can claim yours by going to my profile, clicking on "e-mail" and sending me a message with your full mailing address.
Posted by Doc Elly at 12:22 PM