THE NAMING OF THE ROSE 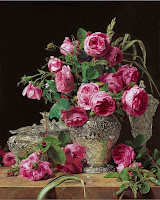 Before I can launch the rose chypre fragrance, I have to name it. Several of you proposed names, and I’m considering all of them at the moment.

Waftbycarol: “PATALA, which is Sanskrit for rose colored.”

Queen Cupcake:” Le Spectre de la Rose. It was the name of a ballet by Karsavina and Nijinsky, the charming story of which is told here. A young girl returns from the ball, enchanted by the scent of a rose given her by a young man. She falls asleep and dreams that she waltzes with the spirit of the rose. What a romantic and intoxicating scent is rose!”

EdC said...
“This may be too literal but I suggest, The Rose Escapes. I initially smelled a dry rose with just a bit of leather. Pretty soon the leather took over & dominated. But then over time the leather faded and the rose remained free of leather for a long dry down.”

Celina said: “If the top notes were less musky I would have called it Rose Couture or Chypre & Couture.”

These are all wonderful suggestions. Patala also refers to the underworld in Hindu mythology, so might not seem like the best choice. On the other hand, maybe it would be fitting for a musky but intellectual rose that’s like a lover’s bouquet of two dozen roses that have been destroyed in an angry outburst by putting them through a wood chipper (Diana, as you can see, I love the wood chipper image!) How about “Crushed Rose”? “Rose Crush”? “Mangled Rose”? Of course after the roses have been through the chipper, they’re just floating around as ghosts, so “Le Spectre de la Rose” fits, too. I like the ballet reference, since it goes with the idea that the scent is both sensual and intellectual, just as a ballet is full of both emotional abandon and physical discipline. According to EdC, the rose temporarily escaped the clutches of the wood chipper, but eventually got shoved in there anyway to release all of the fragrance from its macerated parts. Celina’s suggestion of “Rose Couture” goes with the intellectual and traditional aspects of the scent. The bottom line is that I like all of these suggestions, and find it really hard to choose just one.

In the end, I’ve been calling it simply “Rose Chypre” for so long that maybe that’s become its name by default. What do you think?

[Vase of roses painting by Ferdinand Georg Waldmueller, 1843]
Posted by Doc Elly at 9:43 AM