WHEN IS SHARP FLAT?

This morning I sampled Andrea Maack’s “Sharp”. I expected this EdP to be … well … sharp - full of aldehydes and galbanum, or something along those lines, but it’s not. In fact, it’s the exact opposite. It’s soft and matte, more a light woody vanilla gourmand than anything else. It’s like white almond nougat, mostly just sugary sweet with traces of meringue, toasted almond and vanilla. What makes it different is the woody aspect, as if it had been made in an oak barrel. The whole thing is underscored by white musks, not obtrusive, but filling out the composition. After my initial encounter I read the list of notes, which are pretty much in line with what I smelled, except for the listed orange blossom, which is minimal at best, although orange blossom does briefly appear close to the skin about an hour or two into the drydown if one goes looking for it. In the end, it’s a standard, soft vanilla-musk.

I was liking the scent a good bit, in a low-key sort of way, until I read the manufacturer’s list of notes, which immediately sent me into rant mode. What the **** is “angel skin”??? Andrea Maack is an icelandic artist who farmed out the making of several perfumes to a French manufacturer, so maybe it’s an Icelandic name for white nougat, but then why not use the common name for the candy? If it’s not an obscure type of candy, then it’s completely unhelpful to the person trying to decide if they want to try the perfume, since I would think the common assumption would be that angel skin, like the skin of other mythical creatures, is odorless. As far as I know, it’s not like “dragon’s blood”, which is an actual plant-derived resin, or “baby’s breath”, which is a flower, or “angel hair”, which is a type of pasta, or even “angel food”, which is a type of cake. Googling “angel skin” doesn’t turn up any such alternative meaning, although I did see one comment on a perfume forum asking “how many angel skins can fit into a bottle of “Sharp?" This question immediately conjured up visions of a witch stirring a bubbling pot filled with the foreskins of newly-circumcised baby angels. I know white styrofoam packing peanuts are sometimes referred to as “angel turds”, so maybe “angel skin” is bubble wrap. And “soothing softness”? Come on, can’t you be more specific? Is this a euphemism for “fabric softener scent”? Am I missing some intended clever irony in calling a perfume full of “soothing softness” “Sharp”? Is the Andrea Maack perfume called “Smart” going to turn out to be stupid or dowdy, and the one called “Craft”, a bungled mess? I really hope not. 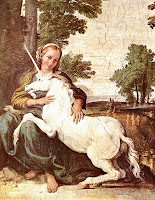 Maybe there’s a whole untapped realm of perfume notes - angel feathers, unicorn sweat, alien spaceship deodorizer, hell-fire and brimstone, ghost’s aura, Santa Claus beard, the river Styx, Pandora’s box … the list could go on and on. It’s one thing to use these sorts of names for a perfume, but it’s quite another to use them as descriptions of the materials that went into making the perfume, which I always thought were intended to give potential buyers an idea of what the fragrance would actually smell like in real-world terms with which they are familiar. On the other hand, we have “amber”, “aquatic”, and “musk” commonly used to describe perfume notes even though they have nothing to do with the scent of real amber, water, or musk, so maybe it’s OK for odd names to be used to describe synthetic fantasy notes. If used often enough, eventually everyone will come to recognize them for what they are.

Of course, one advantage of using silly names for perfume notes is that people will discuss what they might be. As we all know, bad publicity or dubious publicity is better than no publicity, so maybe there's a rationale behind it all.

What do you think about the use of fantasy names for perfume notes? What about contradictions between the name and the fragrance?