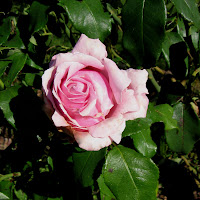 Most of the testers of the four new fragrances have sent comments back to me, so I’m going to start the series on evaluating them. If I've mislaid anyone's comments, please let me know! It looks like two of the fragrances will go into production with minimal tweaking, and two others will go back to the “lab” for further work. I’ll discuss the two that seem more or less ready for release first. As a thank-you for reviewing this fragrance, each of you will who responded will receive a 5-ml spray vial of the rose chypre once it’s officially named and the formula and packaging are finalized.

The rose chypre seems to have been fairly well received by everyone who’s responded so far. It’s fascinating to read the different comments and be reminded of just how much variety there is in the way different people perceive the same scent, and even the different ways in which the same person perceives it at different times. First, I’ll present the comments in their raw form, and then try to pull some common threads out of them.

GAIL writes:
“Initial: Sweet herbs and rose
5 minutes: Citrus begins to predominate over the rose. Bergamot? Citrus leaves?
6 minutes: I expected some waxy aldehyde and here it is.
10 minutes: Musk warms up the rose. Citrus fades a bit.
30 minutes: Labdanum, spicy green rose, soap (wax)
40 minutes: Oakmoss is taking over the rose and herbs. Not much citrus
1 hour: Oakmoss predominates
2 hours: Oakmoss, rose and herbs
6 hours: Faint rose/oakmoss
General comments: This is a lovely Rose/Chypre. Very classic as you say and well balanced. On my skin it was a cool, green rendition of a rose, more leafy than spicy. I wouldn’t change it at all. I liked it, but would probably not wear it often. I prefer tropicals.”

CELINA writes:
“A clean cousin of L'Arte de Gucci, with some skanky, naughty musk.
The floral - woody balance is quite well proportioned. I like the top note and the first few minutes, after that the musk seems to be little bit overpowering for me and distracts from the beauty of the construction. The musks come down after a while. Because I am not a big fan of the musky notes I still find them overwhelming for the first 2 hours. The rose is pretty nice without being overwhelming. It is more green with a sharp fine edge, not the lush sensuous kind. And that comes most probably from the woody notes. I like the overall feeling.

The best part is the dry down where the rose is like a glow for the whole composition. The woody- musky notes are balancing each other perfectly. I would say there is also a subtle tone of earthy pepperiness, and that makes the musks more attractive.

It feels more of an intellectual fragrance in dry down. If the top is skanky and at some point gives you a frivolous feeling, the dry down is part sophisticated and part intellectual with a subdued femininity. Pretty well done. I wish the musks were less liberal in the top note but that is just me. I am sure lots would love it exactly like this. (I am not the best judge when talking about musk.) After 4 hours it is perfect and beautiful. The musks are more quiet, everything is in perfect harmony. Well put together.”

LAURIE BROWN writes:
“I tried this one first because I love chypres. I’d kill to get another bottle of the Coty original, which I had years ago. Right off the top, I get a hay-like note (which is odd, since I don’t see any coumarin in your notes!) There is a breeze of something powdery. About five minutes in, roses start to bloom. Tea rose and the oakmoss start coming on. Then something golden arrives- I’m going to guess it’s the labdanum. After about 20 minutes, the roses come back, but deeper, red roses this time, like an old Hybrid Perpetual like General Jacqueminot. After awhile, the rose fades again, and the oakmoss takes center stage for several hours, actually. But there is a sweetish edge to the oakmoss – the labdanum again? The musks? Or perhaps the patchouli, although at no point could I have pinpointed patchouli in the blend. I like it a lot, although I think I’d like it even better with something green in it, perhaps a tiny touch of galbanum. But that’s just me; I love green.”

ROBERT writes:
“Another beauty... Your Rose Chypre fragrance reminds me of the wonderful scents that were available from a myriad of sources during the Fifties and Sixties. A bright and lush rose is surrounded by a veil of forest. It is a little like Cabochard (but not as spicy) or Knowing (but not as dark). I have worn Aramis 900 so I am not that unfamiliar with this type of fragrance and I will be wearing this on more formal occasions; the chypre ingredients seem to make the rose fragrance less overtly floral. This is a beautiful scent, Elly, and I hope you add it to your regular line. I would also be interested to see this fragrance with just a smidgen of leather added. Again, it is a pleasure to use a scent that seems to contain a lot of high quality naturals. Incidentally, the sillage and longevity are excellent.”

JOAN ELAINE writes:
First impressions on skin: Top is berry-like, slightly medicinal fruity scent, like red licorice. There seems to be a note in this I have smelled in another Olympic Orchids perfume; an icy note- Osafume.
One week later, 2nd testing: The medicinal tone doesn't seem to be there any longer, nor the icy note. Rose smells brighter, tea-rose like. Reminds me of Etat Libre d'Orange Rossy de Palma.
3rd testing, the next day: There is a lightly-powdered muskiness I quite like. Better than the Rossy de Palma. I swear I can smell something like mango, or pineapple - perhaps lending its natural muskiness?
This fragrance has good sillage and longevity. Lasts for hours! I changed my mind about this scent in one week - why sampling is important! On paper, it smells like it does on my skin, but I detect a "violet" note - like face powder.”

EdC writes:
I was very impressed by your rose chypre. I like that it starts as a dry rose, becomes a leathery rose, and goes to almost complete leather domination, then works back to rose, all in about 3 hours. Then it stays a clear rose for another 6 or 8 hours. I have no idea how you can alternate which note dominates but I enjoy it.

DIANA writes:
I love the opening because it is aggressive, bold and sexy. I get a lot of clove with the rose. I feel like this would have a middling to large sillage wake. Not overly sweet. Feels very modern to me. I get rose petals, stem, and leaf, as though someone put two dozen roses through a wood chipper and sent it to you in one giant box. I love it! *And* iI don't think it smells like anything else because you managed to avoid an overly sweet or flowery rose.

INES writes:
The last time I tried it, it literally blew me off my feet. :-) It's really incredible. :-)
Dewy, slightly clean/watery in the beginning, rich and full of blossoms, and lighty tinged green. What's not to love?! Honestly, I find it incredible. It also smells purple to me. :-)
It has a deep and rich rose feel, and it reminds me a bit of Paestum Rose by Eau d'Italie but improved. But it also made me think if there are some spices in there, as I know there are in Paestum Rose but compared to Rose Chypre, PR sort of lacks depth and richness. Warm and dry and rosy and absolutely enchanting.
And I can't help but feel it matured into this since the first time I smelled it.

-----------------
Taking all of these comments together, it seems that everyone smelled some sort of rose, although it varied from very green to not nearly green enough, “spicy and green” to “deep and red”. I think the rose can stay pretty much as is, since it is different types of roses to different people, but still rose. A rose is a rose, even when it’s green, red, spicy, or reduced to mangled petals, thorns, and stems straight from the wood chipper. A tiny bit of galbanum in the opening probably wouldn’t hurt, since I like galbanum and it would enhance the initial green impression.

Most everyone seems to have smelled at least some musk, which may be what was perceived as “powdery” or “leathery” by some, although the labdanum could also have been what one tester perceived as “leathery”. One tester thought there was too much musk, which may be quite valid for those of us who can smell every musk ever invented. For others, it’s just fine, so I don’t think I’ll mess with the musks much. I might reduce them a tiny bit, though, since the musk opening seems strong to me, too.

Most testers seem to have gotten at least some hint of the typical chypre structure (bergamot-aldehydes-floral-oakmoss-musk), so I’m satisfied in that respect. I found it interesting that one tester found it to be a very “leathery” scent, while another called for adding a dollop of leather. I’ll think about adding just a touch of leather accord or bumping up the labdanum resin a tiny bit.

I’m pleased that the scent seems to evolve in an interesting way and have good longevity. My goal was to use high quality natural materials to make a classic chypre of the type that is no longer produced by the mainstream, and it seems to have worked out fairly well. I guess in the end, it’s a classic chypre that uses enough modern materials along with the traditional ones so that it doesn’t smell dated. On to final formulation and production!
Posted by Doc Elly at 10:07 AM