A good many dendrobiums are winter bloomers, keeping the greenhouse interesting through the months when it’s dark, cold, and rainy outside, and dark, cool and dry in my indoor dendrobium area. Most dendrobiums don’t have the “wow” factor that a big, bright-colored cattleya does, but they’re loveable just the same, and some of them bloom a lot more frequently. Dendrobium hercoglossum is covered with flowers, and has been blooming virtually non-stop for over a year. 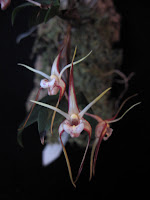 A couple of days ago I found that my little Dendrobium tetragonum was blooming again. I say ‘again” because it seems like it just bloomed. It’s an Australian species, so its ancestors were probably subjected to drought and other natural forms of abuse, making it tough and perfectly suited to growing under my conditions. The plant itself is only about 4 inches tall. Instead of its canes being round like those of most other dendrobiums, they are square, hence the name. The flowers are large for the size of the plant, spidery in shape, and cream colored with rust brown borders. They put out a strong gourmand fragrance during the day, mostly vanilla with caramel and butterscotch, along with some sweet woody notes and just the slightest hint of mint. I don’t know what pollinates this species in nature, but it has good taste. 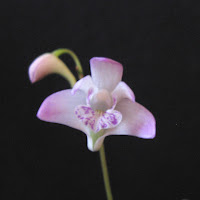 The other mini-orchid that’s blooming right now is Dendrobium kingianum. What a surprise to walk into the greenhouse the other day and see a community pot of about a dozen baby dendrobiums, the offspring of two of my adult plants, blooming away. There’s nothing more satisfying than to see my orchids’ kids grow up and bloom, especially when the flowers are as nice as these are. The flowers are all some shade of pink with delicate magenta markings on the lips. Dendrobium kingianum is not my favorite orchid fragrance, but it’s one of the most powerful. A single blooming plant can scent the whole house during the day. To me it smells like sweet clover amped up several orders of magnitude, with some cloying honey and pollen notes added. I wouldn’t want to wear it as a perfume, but it’s certainly a sillage monster.
Posted by Doc Elly at 8:57 PM