SNOW WEEK AND THE SMELL OF COLD

I’ve skipped posting much for a few days because, frankly, I’ve been spending a lot of time marveling at all the snow we’ve been having. I confess, I love snow with a passion. There’s something miraculous and hypnotic about watching the white flakes fall out of the sky and transform the ordinary world into a magical kingdom in which everything is strange and new. I love to go out and walk in the snow. There’s something profoundly sensual about being showered with fluffy white stuff, like a constant stream of confetti. I don’t even mind that it’s cold. In fact, it doesn’t feel as cold when it’s below freezing and snowing as it does when it’s above freezing and raining that cold Seattle drizzle. 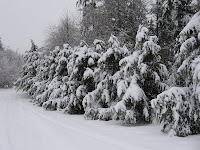 A snow day turned into a snow week, or rather, an ice-snow-ice-snow-ice-snow week. I’ve lost track of what day the first snow occurred, but it was a considerable amount that started out with a thick covering of about 4 inches, followed by a little freezing misty rain that melted a bit of it. Then we got another couple of inches of snow, followed by a massive ice storm - freezing rain that encased everything in a hard, heavy, transparent cocoon of ice. Then the snow started up again and fell heavily for over 12 hours, on top of all the other snow and ice, a major dump that resulted in deeper snow than I’ve ever seen here. This morning it’s finally starting to melt. It’s amazing to see the bamboo, that had been weighted flat to the ground, pop upright as the ice drops off. 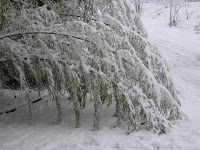 With temperatures below freezing for a week, it made me think about what “cold” smells like. To me, cold air has a kind of watery-mineral scent that’s both wet and dry at the same time. There are other scents associated with cold weather, like wood smoke and (choke!!) car exhaust, which seems augmented many times over in cold weather, but those are not the smell of “cold” per se. 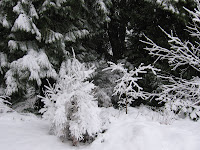 I think there are scents that people have traditionally been trained to perceive as symbols of “cold”, especially mint, and other things that stimulate trigeminal receptors that can signal “cold”, especially the contrast effect of drinking cool water after eating mint. To me mint doesn’t smell at all like cold air, so I was surprised to read a perfume review a while back complaining that a “cold air”-themed perfume didn’t smell cold because it didn’t contain mint. I associate mint with hot mint tea, chocolate-covered peppermint patties, or working in the garden in summer controlling runaway mint, so to me it’s more of a “warm”-themed scent than a cold one, trigeminal stimulation notwithstanding.

How do you perceive the scent of cold air or snow?
Posted by Doc Elly at 2:01 PM