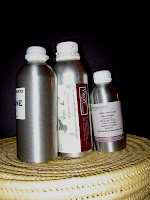 If someone had told me a couple of years ago that I would be buying perfume raw materials by the pound or the kilogram, I would have laughed in their face and told them they were crazy. However, as my business develops, I find myself doing that more and more. Each time I have to replace a material, I order it in a larger quantity. I now have a storage area for those big aluminum bottles that look like thermoses, and I have to say that it’s a wonderful convenience to be able to go there and refill my little 2-ounce working bottle whenever it runs out instead of having to order more.

The whole issue of making perfume in larger quantities hit home this past weekend, when I placed orders for larger “lab” glassware than I’ve been using. Many of my perfumes need some quiet time to blend after mixing, so I need to keep two batches going - a mature one to dilute from, and a young one aging. 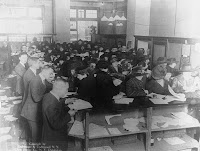 I hate all types of bureaucratic activities with a passion. The aggravation caused by the tax forms, which admittedly would have been easier to deal with had I kept organized records rather than having to search through all of my real and virtual files for information, was compounded by online forms that I had to fill out for the university, one of which I submit every year. However, every year the format changes even though the responses don’t, so I can’t use the old material. Wasted time. The other form was a one-time thing, which I spent a great deal of time filling out, only to have it rejected due to a bug in the system, deleting all of my work. More wasted time. I sincerely hope that one day communicating through online forms will be as easy as simply talking in person, talking on the phone, responding to an e-mail message, or even mailing a handwritten memo. Until then, I will continue to go berserk every time I encounter a user-hostile form online.

It’s sad to think how much of our lives are wasted on bureaucratic trivia. It only seems to have gotten worse now that every organization has a plethora of online forms to fill out. It’s easy to make people fill out a form that no one has to deal with in person. For all I know, no human ever sees any of the mandatory forms and reports that I submit to websites. It’s even more likely that no human ever sees any complaints about forms that are submitted - on another form, of course.

[Filling out tax forms by hand in 1920 photo from Wikimedia]
Posted by Doc Elly at 9:43 PM