This morning I read an article about how most airlines in the US are bitching and moaning about new government regulations that would require them to post the real price of a ticket after taxes and mandatory fees have been added. The airlines’ stated argument for not doing so is that the “higher prices” would deter people from buying tickets. Huh? What higher prices? Do people really not check to see how much the bottom line would be before buying an airline ticket? Whatever the price posted by the airlines, the price that shows up on the customer’s credit card statement is going to be the total amount after the taxes and mandatory fees have been added, and that’s the amount that comes out of their bank account. Do the airlines really have such a low opinion of their customers’ intelligence and math skills that they don't expect them to notice the bottom line? If the airlines truly wanted to make people aware of how much they are paying in taxes, as they profess, then there is no reason why they can’t provide a breakdown of what items go into the total price, including taxes, government fees, and their own extra hidden fees, such as “fuel surcharge”.

Once the airlines are required to show the total cost of a flight, I hope that hotels will not be far behind. I can’t begin to say how annoying it is to look at hotel rates, only to find at checkout that there was a hefty tax added to each day’s stay, making the total far more than was budgeted. Even though I know about this practice, it still irks me to see the hidden taxes reflected on the final statement. I long ago learned to inquire how much tax would be before booking a hotel room, but I suspect I’m in the minority given the surprised reluctance of most hotel desk employees to talk about it. I understand that some hotels also have extra hidden “resort fees” on top of the taxes. I just haven’t stayed at those places, since I don’t go to Las Vegas, Disney World or such popular vacation spots. 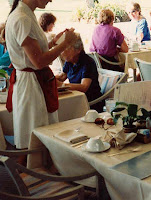 Finally, there’s the food service business. In the US, the prices posted on the menu do not include tax (about 10%), nor do they include the expected tip for the wait staff (anywhere from 10-20% of the total, for an average of about 15%). The practice of tipping is so ingrained in US culture and so taken for granted that very little has been written about it. A Google search turned up only a handful of minimal posts like this one. Once tax and tip have been added to the total, the customer pays an average of about 25% more than the posted menu price. Failure to include tax and service in the price of food makes the base price of a meal appear much lower than it actually is, even though everyone at some intuitive level knows that tax will appear in the bottom line and that they are expected to leave a significant tip. Apparently false perception through a first impression is everything.

Not paying wait staff a living wage is a longstanding practice in the US restaurant business, effectively transferring the responsibility for paying the bulk of staff salaries directly to the customer, thereby allowing management to avoid paying social security and health insurance for their employees. If wait staff, the majority of whom are women, were respected enough to be paid a living wage with benefits, and if wages and tax were included in the price of food, the prices shown on every menu in the US would probably rise by 25-30%, but customers would walk out of the restaurant minus exactly the same amount of cash (on average) as if it had been done piecemeal. The advantage of engaging in denial of the bottom line escapes me.

[All photos adapted from Wikimedia]
Posted by Doc Elly at 10:53 AM