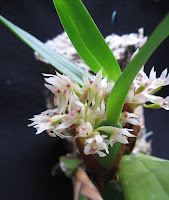 The other day when I went in the greenhouse to get some plants for an order, I found Maxillaria densa in full bloom. It’s one of those weed-like epiphytic orchids that one would hardly notice when it’s not in bloom, and when it is in bloom, the main attraction is the fragrance, not the appearance of the flowers. It’s originally native to Central America and parts of South America, where it reportedly grows in pine forests. The flowers are small and white, with touches of pink on the lips. They emerge as a dense cluster from the side of a pseudobulb, where they barely peek up above the surrounding sheath like a huge bouquet in a florist’s paper wrapping cone. The flowers always look droopy, like they’re not quite open. 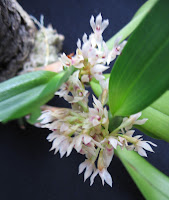 So much for the flowers. The fragrance, on the other hand is one of the most spectacular in the whole realm of orchid scents, for all the world like a fine vintage perfume. It’s rich and strongly floral, spiced with cinnamon; it’s powdery, musky, and woody. If you were to smell the fragrance without knowing its origin, you would probably say that it’s a really good Guerlain. Really. It’s gorgeous - one of the best orchid scents around. It doesn’t smell like a flower, it smells like a perfume.

Two days ago I was sniffing my tiny sample of Guerlain Djedi, and find that the Maxillaria densa fragrance is surprisingly similar. Just when you think you’ve smelled it all, some orchid will come up with a complete surprise. Maxillaria densa blooms like clockwork several times a year, so I look forward to many sniffs of this fantastic fragrance.
Posted by Doc Elly at 12:18 PM