THE DEVIL AND HIS PERFUMERS: PART 2

Here are my impressions of the second set of offerings in the series of four Devil Scents  made by three different perfumers, inspired by Sheila Eggenberger's novel, Quantum Demonology.

Neil Morris Devil Scent #1
Although the opening is not as dramatic as Midnight at the Crossroads Café, it’s still an insistent and unique blast of spicy floral seduction, almost a more restrained version of Midnight. As it develops, it gains strength, becoming powdery and overtly floral, with hints of roses, violets and soft suede leather. Instead of being melodramatic, it’s just calmly beautiful in a strong and reassuring way, like the partner who’s always there when needed, saying “don’t be afraid. Everything will be all right.” As a stand-alone perfume, it’s every bit as gorgeous as Midnight, and I would wear it anywhere, any time.

Amanda Feeley Devil Scent #2
Amanda’s #2 is even more woody and bitter than #1. It’s definitely way out there in a space where perfumers generally don’t go, not even those who make a point of being eccentric. It’s dominated at first by a strong weedy-herbal scent, possibly an overdose of some type of Artemesia, accompanied by a hint of chlorine from a swimming pool, and something dairy-like that reminds me of rancid butter or oily cheese. After a while it becomes woodier, sort of like sawdust, and I can’t help thinking about wet sawdust or wood chip bedding in the bottom of an animal cage, maybe a guinea pig cage. Wow! This is one of the strangest perfumes I’ve smelled. As it develops, I think of an old-fashioned circus, with well-used sawdust in the ring, or a big pile of slightly fermented hardwood sawdust at an abandoned sawmill. The woody scent hangs on for hours, with very good longevity for an all-natural composition. Almost 24 hours later, I can detect a faint, citrus scent on my skin, and I think it’s from Amanda’s #2. This is amazing stuff. 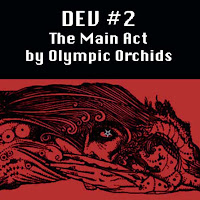 Revisiting my own DEV #2, it’s completely different from Neil’s and Amanda’s interpretations. It starts out with a sharp, spicy barrage similar in intent to the “Poof!” that Neil used to such great effect in Midnight, but of course it’s a completely different “Poof!”, a shower of hot spices, resins, boozy fruit, well-worn black leather, and floral undertones instead of beer and brimstone. By the next morning the spices have run their course, and it ends up as an ethereal, slightly powdery, musky rose and incense scent, like the remnants of an intense night of lovemaking.

I think what both Neil and I did was try to capture the joyous moments of the courtship phase of the story, focusing on the emotional highs while only hinting at the nightmare flashes that were increasingly interspersed among them – horrifying visions and experiences that arose from the heroine’s own insecurities and fears. Amanda addressed those head-on in her perfume, portraying the circus parade of evil things that lie at different levels below the surface, eagerly waiting for an opportunity to invade our nightmares and tamper with our waking lives. Once again, the three perfumes together provide a much more complete account of the story than any one by itself.