THE DEVIL AND HIS PERFUMERS

It was fascinating to discover that at least three of the perfumers who worked on the Devil Scent project came up with a suite of four Devil perfumes, each connected to a different part of the narrative of Quantum Demonology, the novel by Sheila Eggenberger. After my Devil Scent suite had been completed and released, I was curious to see what the other participating perfumers had come up with, so suggested on Facebook that we all do an exchange. Neil Morris and Amanda Feeley were kind enough to exchange their creations with me. Both of them had independently come up with a set of 4 Devil perfumes, just as I did, each representing a stage in the narrative. Amanda and I even both thought of them as variations or sections of a musical composition! This parallel thinking on the part of three perfumers who had not talked to each other at all kind of blew my mind until I realized that Sheila’s novel had had the same effect on all of us, that we were just acting as the agents of the story, and that these perfumes could not have been created in any other way.

Trying all of Neil’s and Amanda’s perfumes was the most fun I’ve had for a long time. Neil’s perfumes arrived in the mail first, so I initially thought I’d write about all of them before sampling Amanda’s. However, because our Devil Scents are conceptual triplets, I thought it would be fascinating to compare Neil’s, Amanda’s, and my interpretations of each stage. To avoid a single blog post that grows to the length of a novel, I’ll be doing these comparisons in four or five separate posts.

I’ve always had a special liking for the work of Neil Morris because I feel as if he makes perfumes that I could have made, and sometimes wish I had made. His work is not only far removed from mass-market mainstream, it’s far from niche mainstream, too. And yes, there is such a thing as mainstream niche fragrances - lots of them. I think all of the Devil Scents lie somewhere far outside this particular circle of Hell. 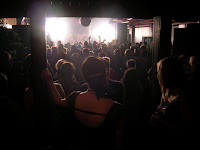 Neil Morris Devil Scent: Midnight at the Crossroads Café
As I understand it, this was meant to be the prelude to Neil’s other Devil Scents, which go by number, not name, and represents the protagonist’s first meeting with the Devil. The first spray took me by complete surprise with a sharp, burned scent of fire and brimstone along with an overdose of stale, excessively hoppy-malty beer. The second time, when I was expecting this combination, it seemed less like a violent punch in the face with a wet bar towel, and more like the dramatic opening of a magic show. After just two wearings, I’ve actually become quite addicted to Midnight’s unique opening. The explosive “POOF!” of light, sound, and smoke in which the Devil first appears eventually clears away, revealing the spices, resins, flowers, and woods that are at the heart of the perfume. It’s absolutely gorgeous. Seductively gorgeous, as well it should be. To quote the words of an old song, it makes me happy when skies are grey, as they are today due to freezing temperatures and dense fog everywhere. Neil’s Midnight is the best thing I’ve smelled in ages. After the first hour it is spicy, slightly powdery, slightly floral, and slightly resinous, with a lot of subtle sillage that ripples and drifts around in a now-you-smell-it-now-you-don’t fashion. The sillage-producing stage has excellent longevity. In the end it turns into a slightly powdery vanilla skin scent that lasts a good while longer. I would wear this anywhere, public be damned. 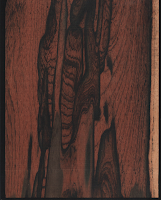 Prior to the Devil Scents, I had not tried anything from Esscentual Alchemy, the brand of natural botanical perfumer Amanda Feeley, so had nothing to use as a reference point. I do have another one of her non-Devil fragrances, Hokkabaz, which I will be reviewing later.

Amanda Feeley Devil Scent #1
This one starts out all bitter herbs jazzed up with a little citrus. It quickly adds a lovely woody note, so that the fragrance comes to remind me of a freshly carved wooden chest that’s been used to store spices. I’ve smelled some sort of wood like this before, but can’t identify it with a name, although I can picture it. It's not like the wood grain in the photo, but it does convey a little of the feeling. Strange. It smells like an all-natural fragrance, herbal and spicy from start to finish. Sillage is moderate, but it lasts on my skin for about 5-6 hours, which is really good for an all-natural composition. 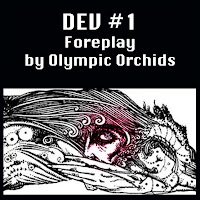 Last night I revisited my own Dev #1, so that I could compare it to the other two. The giant arborvitae top notes give it a cheerful, buoyant, and almost translucent opening quality that’s very different from the others. However, it darkens as it develops so that by this morning the African bluegrass and incense base dominates, providing a foreshadowing of what’s to come.

After smelling three different versions of the first perfume in the series, it was clear that we each interpreted the heroine’s initial meeting with the Devil in very different ways. Neil had the Devil making a dramatic, fiery, smoke-filled, drum-roll-enhanced entrance, but then turning sweetly seductive once he sat down with her. Amanda had him appearing grouchy and dangerous in a low-key way, appealing to the cynic in her and convincing her that he was her friend and partner in disillusionment, ultimately comforting her with his strong presence. I had the Devil starting out suavely seductive and smiling, turning more mysterious and threatening once he had her completely hooked on his charms and promises. All of these interpretations are totally right and, taken all together, they convey even more of the underlying psychological complexity of the story than any one by itself.
Posted by Doc Elly at 9:36 AM