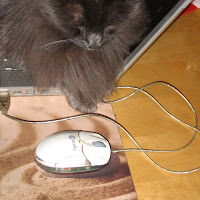 I do almost all of my writing and other sorts of non-lab-non-farm work on a laptop computer that travels with me from home to my office at the university, and back again. I’ve never taken to using the track pad that’s built in, probably because I do a lot of work with graphics, where precise positioning of the cursor is important. For me, a mouse works a lot better than the track pad. To protect the wood table that I work on at home and facilitate movement of the mouse, I have an old-fashioned mouse pad, made of some sort of non-skid rubbery material covered with fabric. Maybe you can see where this is going already.

I like to test perfumes and perfume materials by dabbing or spraying them on my wrist, so when I manipulate the mouse, my wrist touches the pad. Over the years that I’ve had this particular pad, it’s become impregnated with a huge variety of odorous substances, so that it emits a perfume of its own. The fragrance, affectionately referred to as “Mouse Pad”, is, of course, a sliding olfactory integrator of everything I’ve worn over the past days, weeks, months, or years, with a scent that changes progressively as new things are added and old ones fade away. Sometimes my wrist picks up the scent of the mouse pad and I smell it as if it were a perfume that I’d applied intentionally. That’s what happened this morning. I smelled my wrist and thought, “Oh, that’s funny. I thought that perfume had faded away last night.” Then I realized that it had indeed faded away, and what I was smelling was Mouse Pad in all its glory.

I first became consciously aware of the mouse pad phenomenon quite a while ago when I was testing some new accords that I’d mixed up and some new materials that I’d received. I kept smelling something that I really liked, and couldn’t figure out where it was coming from. I eventually traced its origin and realized that it was a combination of a rose accord, lemongrass, Habanolide, Helvetolide, vanilla, and neroli. Maybe there were some other things in there, but those were the main ones that I wrote down because they meshed together so well. Maybe one of these days I’ll make a perfume based on the Mouse Pad experience. It could be like a subscription, with an initial formula, and periodic updates with additives that can be combined with the initial formula, changing it according to the season, but with some sort of underlying continuity. Actually, I think I might just do that, starting this spring because it would be an interesting experience. I don't think Mouse Pad is an attractive name for a perfume, so it would have to be something else. I thought of Metamorphosis and Evolution, but those appear to be taken. The next thought was Proteus, which doesn't seem to be taken.

If anyone else comes up with such a gimmick, you read it here first!
Posted by Doc Elly at 9:55 AM