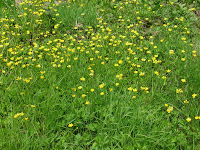 I haven’t posted for a week because I just returned from St. Louis, where I was at a meeting related to my “day job”. Oh, the joys of flying, having my flip-flops x-rayed, staying in an upscale hotel that has the chutzpah to charge $10 a day for internet access (I refuse to enable that egregious manifestation of greed even if someone else is paying, hence no blog activity), and going to meetings that start at 8:00 AM, which is 6AM home time. To make matters worse, the whole topic of the meeting was deeply disturbing and depressing because it dealt with an ecological problem to which there may be no solution. At least, it appears that there is no easy solution as long as humans continue to have their way with nature. The meeting took place at the St Louis Zoo, where we were given a tour of several captive breeding colonies of animal and invertebrate species that have gone extinct or are about to become extinct in the wild. I know everyone who tries to save endangered species means well, but I can’t help wondering if the efforts are like trying to bail out the Titanic with a teaspoon. The efforts to prevent extinctions create a daunting Pandora’s box of ethical considerations that I think I’ll save for another post since they apply to orchids and other plants as much as animals.

The whole impact of humans on nature was brought home to me like a punch in the gut the evening I went running in the upscale neighborhood near the hotel where I was staying. No one was on the streets because the temperature was 90 degrees F (32 degrees C), and the humidity was high. People were hiding in their cave-like air-conditioned cars and houses, where the temperature probably averaged 65F (18C) or less, using huge amounts of energy unnecessarily. OK, I know it’s hot, but why do people feel the need to cool their environment so much in the summer that winter clothing is needed inside? What’s wrong with having the indoor temperature at, say, 80F (27C) in the summer, wearing a short-sleeved shirt and sandals, and maybe sweating a little bit? Why not open the windows and let the breeze in? The other thing that struck me while running was the huge expanses of obsessively groomed, green grass surrounding every house, completely uniform in color and height, 100% weed-free, and reeking of the fertilizer, pesticides, and herbicides that had been applied to achieve that boring green look. I thought I was going to choke on the fumes rising up out of the lawns. What do people use all that grass for if they don’t go outside? Are they not aware that their neighborhood stinks due to all the chemicals they put on their grass? Maybe not, if they stay in their climate-controlled shells all the time. These are probably some of the same people who on occasion make a tax-deductible contribution to campaigns to save charismatic mammals, all the while killing the lower-profile members of the ecosystems that support their poster children.

My photo today is of some of the beautiful “weeds” that grow on our property instead of green grass. Tomorrow I’ll probably turn my thoughts back to perfume, but for today I have to express some of the pessimism that I’m feeling about whether human awareness of our role in the environment will ever evolve beyond the drive to kill anything colorful that appears in a perfect green lawn.
Posted by Doc Elly at 12:18 PM