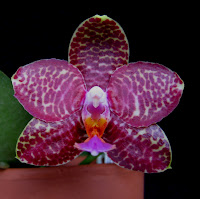 This week I have a hybrid orchid blooming that has Phalaenopsis gigantea in its ancestry, and for some reason it reminds me of Phalaenopsis javanica, the species that inspired the scent Javanica. The photo on the left shows this hybrid, Phal Perfection Is ‘Chen’. The flowers of both gigantea and javanica are maroon spotted and fragrant. Phal gigantea and its hybrids have large flowers with a light citrus scent, while javanica has tiny flowers with a sweeter and more complex fragrance, although they do have a hint of citrus, too. 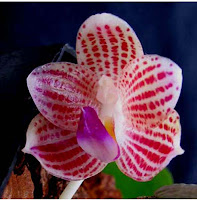 When I got my first Phal javanica plant it was growing in a pot of sphagnum moss, and its first flower spike surprised me by burrowing down into the moss as if it were a root. I extricated it and propped it up so that it could bloom, and eventually it produced a small flower like the one in the photo on the right. It didn’t occur to me that it might be fragrant, but one day I noticed a sweet, spicy, almost incense-like fragrance that was exactly like a fine perfume. Eventually I traced it to the little flower hiding under the big shiny leaf. For days I kept sniffing the flower, wishing that I could capture it in a perfume. The plant has bloomed many times since, with new flowers appearing one after another from the same stalks, and the fragrance varies a little from one flowering to another, sometimes more spicy, sometimes more citrus-like. I think it depends on season and weather conditions. 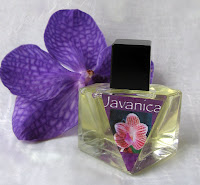 When I started making perfume, one of my first goals was to create a fragrance that epitomized my memory of that first blooming of Phal javanica. I started out with a sweet base of vanilla, resins, balsams and woody notes, added some floral notes including jasmine and rose geranium, put in a good shot of frankincense and nutmeg, and topped it off with the citrus that’s characteristic of fragrant phalaenopsis. Javanica has turned out to be one of my favorite orchid fragrances.
Posted by Doc Elly at 11:48 PM