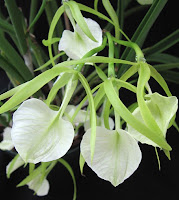 It seems like time to write about another one of my creations, so what better place to begin than with the orchid that started it all, Brassavola Little Stars? Brassavola orchids are native to Central and South America, where they grow as epiphytes on tree trunks and branches. They have cylindrical, spiky leaves and masses of thick, exposed roots that most people would consider ugly, but when they bloom, what a show! Little Stars is a hybrid between two different species, B nodosa and B cordata, and it was the first Brassavola that I grew, back before I knew much about orchid growing. The first time it ever flowered, I walked into the house one night and smelled the most amazing and unexpected fragrance, something like ylang-ylang spiced with cloves. I had no idea what it was or where it was coming from, but it didn’t take long to trace it to my blooming orchid plant with its sprays of green and white flowers.

To make a long story short, the plant bloomed repeatedly over the years, each time producing the same exquisite fragrance, but only at night. Since then I’ve grown other white, night-fragrant orchids, native to both the Old World and New World, and found that most of them have a similar fragrance, a stunning example of parallel evolution.

Every time I smelled my night-fragrant orchids I thought how wonderful it would be to create a perfume that was like their scent. Eventually I had to try, starting with the ylang-ylang and cloves that seemed to be the basis of the Little Stars fragrance. It was then that I quickly discovered the principle of top notes! Both ylang-ylang and clove are fairly short-lived fragrances, so the mix would be gone within an hour. I then had to experiment with base notes, trying to come up with something that would hold the scent on the skin for a reasonable amount of time. I won’t bore you, dear reader, with all of my trials and errors up and down the learning curve, but in the end I settled upon a base that contained several different resins, spikenard, cedarwood, and a little synthetic agarwood (oud). The rest of the mix includes some citrus, green tea, and a few other floral notes. I would say that in the end, the blend is about 80% natural and 20% synthetic.

In the end, because of the constraints of perfumery, the fragrance isn’t exactly Brassavola Little Stars, but rather its dark and brooding cousin. It has the delicate, sweet and spicy top notes of my Little Stars’ flowers, but they’re riding on the strong shoulders of a woody, earthy base. Several people who have tried it describe it as a “goth” fragrance. Maybe that’s fitting for a flower that only comes out at night.
Posted by Doc Elly at 8:42 AM