THE MAKING OF A “SUMMER” FRAGRANCE: DENDROBIUM MONILIFORME 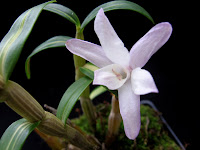 In the Pacific Northwest, the 5th of July is officially the start of the dry season, generally a period of unbroken warm and sunny weather that lasts until sometime in September. The clouds broke up yesterday afternoon and the sun arrived right on schedule. Today the sky is bright blue and it actually looks like summer. Our tomatoes will finally grow!

As I remarked in another post, I don’t subscribe to the idea of “men’s” and “women’s” fragrances, and I don’t really believe in “summer” and “winter” fragrances, either. Having said that, I’ve recently embarked on a fragrance that would probably fit the traditional image of “summer” scents. Could it be that I chose to work on that one rather than a heavier one because of the season? Or was it because my Dendrobium moniliforme had just been blooming?

Whatever the reason, I decided it was time to create a fragrance in honor of this little gem of an orchid. Dendrobium moniliforme is a miniature orchid species native to Japan, where it is grown for its attractive plant form, often with variegated foliage. The flowers are a bonus, usually appearing in spring after a dry, cool period in the winter. They are generally somewhere in the white to pink range, and are fragrant, with a distinct anise-like note.

To honor my collection of Den moniliforme plants with their own fragrance, I started with top notes of anise and star anise, adding some heliotrope, light vanilla, and airy, greenish floral notes. I think I’ve pretty much nailed the flower scent itself. For a base, I chose to make a white musk accord, something that I can use as a base in other scents, too. So far it seems to go well with the anise and floral notes. Right now I’m sitting here with the various accords on tester strips, waving them around occasionally, and liking what I smell. I’m sure some more tweaking will go on, but so far this has been one of the easier scents to make.

Now I’m trying to decide which moniliforme variety to name the scent after. Some of the candidates are Bayoumaru, Genetsu, Osafume, Siroaya, Kitoumaru … and others. I have about 20 different types. I just noticed that Siroaya is covered with buds, so it’s blooming a second time this year. Any comments about which name sounds best for a perfume?
Posted by Doc Elly at 9:14 AM