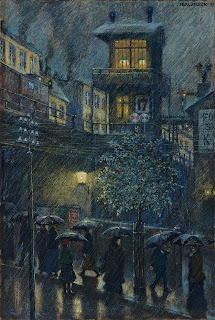 We’ve been having unusual weather all summer. Normally we get little or no rain in July, but this year it’s been raining every few days. This morning it rained hard, with thunder that woke me up.

Tonight just before midnight we went out for a walk. There was a tiny spritz of mist in the air, so light that it seemed like it was floating and fizzing in tiny sparkles instead of falling. It wasn’t long until I realized that the rain had brought out all sorts of odors from things I couldn’t see in the dark. It hit me near the end of our street, where I smelled an intense fragrance of dry grass that had been drenched by the rain. It was like the odor of hay, but amplified many times over. It was also like the dry grass accord that I made for Salamanca, and I realized at that moment just how accurate that accord was. Then came the lavender that grows on the corner, exhaling its aroma, nearly as strong as opening a bottle of lavender oil. Down the hill there was a place that smelled of dead blackberry leaves and mildew, and beyond that there was a supersaturated green scent, not grassy but leafy, like broad, juicy leaves of trees and shrubs spewing out their exuberant greenness into the night.

At first I wondered if all of these intense scents were real, because they were so amazingly vivid. However, returning by the same route, I smelled them all again, in the same order. The most telling one was the dry grass at the top of the hill, followed by one that I didn't notice the first time, the scent of water on roses. This is one that’s really hard to describe, but I wish I could make it into a perfume.

As we headed for the house, I fantasized about what it must be like to be a dog and know your environment mostly by scent instead of vision. Thanks to the rain, what could have been a routine walk became an olfactory adventure. 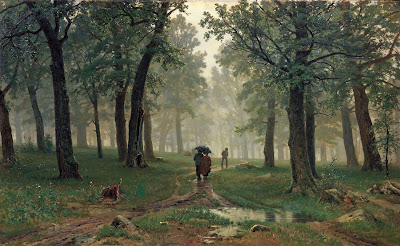