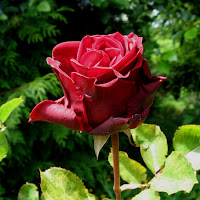 Like any other kind of art, perfume isn’t something that I deliberately and consciously create on an intellectual level, it’s something that comes to me from an unknown place. Like music, I take a theme, forget about it for a while and simply score it out once it’s ready, then work on an arrangement. I always have multiple perfume projects going on in parallel, and never know which one of them will mature first. However, when something does mature, it’s very clear, sort of like labor pains. Some projects have ridiculously long gestation periods, others just pop right out.

This past week, the rose chypre that I mentioned some time ago was begging for attention, and I’ve mixed up a first draft using a traditional base of oakmoss, clear labdanum absolute, lots of musks, and dabs of two different kinds of patchouli. The heart is my new rose accord and some rose de mai absolute with just a touch of cyclamen and ylang-ylang. Of course the top notes include the obligatory bergamot and, along with it, some aldehydes, petitgrain, red mandarin and red thyme. I’m trying it out on my wrist as I write, and it’s not bad for a first attempt. At first I thought I went a little too heavy on the top notes, but now that it’s been sitting for a week, it’s fine. I added a little more labdanum to produce an obvious resinous note in the base. At first I worried that the mix wasn't strong enough, but after a half hour on my skin it really took off, and it looks as if it will last well. I think it’s ready for testing. It's not the pink cattleya, but that's eventually coming, too.

The as yet unnamed rose chypre will be in the set of new samples that I send out for their preliminary test, along with Salamanca, Café V, and Emergence. This is the last call for anyone who would like to test a trial version of these new fragrances, since I’ll be mailing them out soon. If you have not already volunteered and would like to try them, please leave a comment here or send an e-mail.
Posted by Doc Elly at 9:56 PM