PERFUME FOR A ROAD TRIP 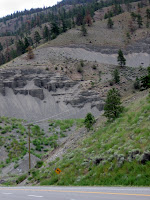 If you’ve ever driven a car on the highway for several hours straight, you’ve most likely encountered the problem of how to keep from falling asleep at the wheel. I know I have.

Many years ago, in another life, I had a job in one state and a relationship in another. On occasion I would drive down the US East Coast on a Friday night and back up again on a Sunday night. The drive was boring, to put it nicely. Several times I actually did fall asleep and learned why the edges of the pavement and the center line had grooves in them. I tried all sorts of strategies to keep myself awake. Some of the ones that worked, at least temporarily, were eating, singing, bouncing up and down in my seat, listening to the radio, and stopping at every rest stop to walk around and drink a cup of coffee. None of these strategies worked all the time.

On my latest road trip to Canada, I discovered that the right perfume can help keep me awake while driving. It’s always an interesting process deciding which perfume(s) to take on a trip. This last time, I took only two, both in small sample vials. They were Paestum Rose and Musc Ravageur. I chose them because they are contrasting, they aren’t mine, and I enjoy them both. I’m not sure how fitting they are for a small town in the middle of BC, but who cares? I didn’t feel like bringing any of my own perfumes because I felt like I needed a break from them.

We decided to do the trip up north all in one day, so started out at 6:00 AM, and arrived that evening before dark. Of course, it stays light most of the night in late June in that part of the world, so that doesn’t mean it was a quick trip. In fact, it took over 14 hours. Before leaving that morning, I put on some Montale White Aoud, a newly discovered favorite. It lasted through the entire trip, stimulating my brain with little puffs of sillage throughout the day. I was surprised to find that while driving, the perfume really held my attention and helped keep me awake. When I was not driving, it seemed calming and helped me rest. I ended up wishing I had brought it along for use on the way home, too.

While in BC, I ended up wearing Paestum Rose every day. I love the incense note in it, and for some reason its ethereal, woody character seemed to fit well with the northern pine forest atmosphere. I didn’t feel at all motivated to wear Musc Ravageur. I like to think that the right perfume repels bears, moose, foxes, wolves, and all the other local wildlife that I heard talk of. Maybe musk, even synthetic musk, is not a good idea. Next time I visit I’ll bring along some of the olfactory big guns to keep me awake on the drive and protect me from the local fauna, at least in my imagination.

If you drive long distances or do other boring tasks that require concentration, what do you do to keep awake and alert? Do you find that perfume helps? If so, which ones work best for you?
Posted by Doc Elly at 11:35 AM