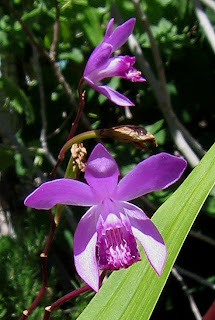 Soon after we moved into our current house over 10 years ago, I ordered some plants from one of those beautiful, slick catalogs that come in the mail every spring. You know the ones – they always show the strawberries as big as footballs, the dahlias as big as your head (and in psychedelic colors no less!), the lilac that bears red, white, and blue flowers (all on the same bush!) and the pumpkins that you have to harvest using a crane and flatbed truck. I’m ashamed to say that I’m always tempted by these catalogs, and even fall for them once in a while.

When our house was new our back yard looked like a desert, so in a moment of weakness I ordered some things from one of those catalogs. As I should have expected, all of the plants were either dead on arrival or so severely debilitated that there was no way they could live, even under the best of conditions. The one surprise was the freebie that came with the order. It was three bulbs called “peacock orchids”. (“Order $20 worth of plants, get these little fellows free!”) I took a look at the miserable, moldy brown lumps and gave them a decent burial on the east side of the back deck, wished them a happy trip to the afterlife of abused plants, and forgot about them. 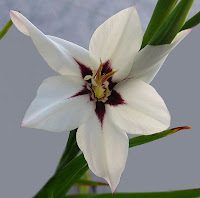 Then something sprouted from the grave. It started out as three little conical shoots that soon turned into three vigorous plants with broad, pleated green leaves, and before I knew it, they had produced three tall flower spikes, each with many bright magenta flowers. It was the peacock orchids! Only they weren’t peacock orchids. The plant that is commonly known as a “peacock orchid” isn’t an orchid at all, it’s a gladiolus-like plant called Gladiolus acidanthera or Gladiolus callianthus, shown in the photo on the left. It’s white with a red center, and it has anthers covered with powdery pollen and a pistil like a regular flower. My plants were neon magenta, with three sepals, two petals, a frilly lip with raised ridges like super-corduroy, and the typical orchid column with built-in, snap-off pollinia. It didn’t take much research to determine that they were Bletilla striata, also known as “Chinese ground orchid”, an Asian deciduous terrestrial species, and a real orchid. In fact, it looks like a small Cattleya.

Over the years the Bletilla have died down every fall, come up every spring, and multiplied like rabbits. I think all of the multiplication takes place underground, through growth of new bulbs from old ones, but they do get pollinated and form seed pods each year. I’ve given some bulbs away, but there’s now a huge patch with an uncountable number of growths. They’re the only thing out of that whole shipment that survived. Obviously the company didn’t know what they were sending, given that they were not only misidentified, but actually grew and thrived. They’re in full bloom right now, already setting this year’s crop of seed pods.

Because they’re outside, I’ve never paid a lot of attention to them, just like the Dactylorrhyzas and Calanthes that come up and bloom like clockwork every year. It was not until this year that I actually realized that the Bletilla are fragrant. It’s not a strong fragrance, it’s a very light and subtle sweet pink scent, a little powdery and a little bit moist and airy, but most definitely floral. It reminds me somehow of the old version of Shiseido Murasaki. It’s beautiful in a near-transparent sort of way. To think that I never realized that these orchids, which are some of the most reliable perennials in our garden, actually have a gorgeous fragrance in addition to their lush foliage and colorful flowers! It’s just one more reason to love them.