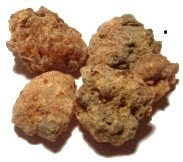 This morning my sample of the day was D. S. & Durga’s Resin from a 2.5 ml decant that I got on sale from TPC. It didn’t leak or evaporate – hallelujah! I was a little surprised to find that it’s pretty much myrrh straight up, with a halo of sweet, violet powder in the sillage, so I did a search for information about this fragrance. I didn’t find much. There is one fairly negative review on Basenotes, a listing on Fragrantica that says it’s “masculine” and that the notes are “copaiba balsam and myrrh”, and that’s it.

The D.S. & Durga website is one of those overly designed exercises in conformity with the latest trend, complete with a gratuitous “welcome screen” that is late to arrive and overstays its welcome, too many moving parts, light gray or pastel font on an off-white background, and no way to go back once you’ve gone forward. I’ll be glad when the fashion for super-low contrast type and cumbersome animations on perfume websites (and my students’ Powerpoint presentations) goes the way of the dinosaur and the dodo bird. What I did find out from the website, by deduction, is that Resin has been discontinued.

Back to the perfume itself. Copaiba balsam isn’t much of a fragrance on its own, and is used more as a fixative than for its scent, which is rather flat, woody, and a little peppery. Myrrh, on the other hand, is one of the quirkiest scents in the whole realm of perfumery. There’s quite a bit of variation from one variety to another, but what’s constant is a deeply resinous, bitter, leathery, almost industrial, note that’s absolutely unmistakable. 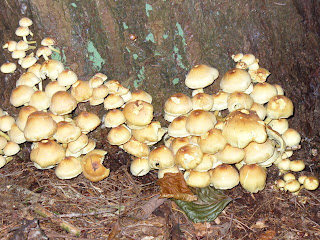 I have written about myrrh before, but sometimes I can have a perfectly formed image of a scent in my mind but cannot find the right words to describe it to others in terms they'd understand. This can be very frustrating. Smelling Resin this morning I had an epiphany in the realm of semantics. Myrrh has a distinct smell of freshly cut “champignon”-type mushrooms. All mushrooms have this scent, but the white and brown button mushrooms have it in a fairly pure form, unobstructed by other notes. It’s what I smell when I’m out walking in the woods and catch a whiff of mushrooms before I see them. It’s the smell of dead leaves turned to flesh, the smell of wet, decaying forest sprouting exuberant saprophytic life. Often I’ll go looking for the source of the scent, and sure enough, there the mushrooms are, hiding under the dead leaves or behind a fern. It’s a pungent, earthy scent and it’s one of the notes in myrrh, stronger in some varieties than others. 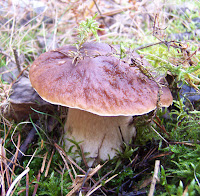 It’s funny that the natural mushroom absolute that I have, made from cepes, doesn’t smell at all like fresh mushrooms. In fact, it smells more like soy sauce than anything else. However, my experience with the mushroom note this morning set the gears of inspiration in motion yet again, making me wonder what it would be like to create a perfume based on myrrh and mushrooms. It might turn out to be “not suitable for human use” as the Basenotes reviewer observed about Durga’s Resin (I happen to disagree with this statement), but it would certainly be an interesting exercise in blending related notes.

[Myrrh and mushroom photos from Wikimedia]
Posted by Doc Elly at 10:02 AM