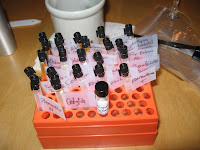 Just when I thought I had most everything I needed to make perfume, my world shifted again with some new discoveries. What set it all off was a package from a fellow perfumer that came in this afternoon’s mail, containing five new materials that I bought from him and 23 (!) samples of other materials, most of which I haven’t tried. It’s going to take me a while to go through the 23 samples, but one of the things that I bought is going into at least one version of the Devil Scent, both Dev and Lil Mod 2. If I keep discovering new materials, I’ll never get those perfumes finished!

The new babies are all synthetics with names that probably wouldn’t ring a bell with anyone, so I’m not sure how much to describe them here except to say that one is an animalic scent that’s a different version of the ones I already have. Another is a wonderful floral base that I’ve already put in Lil 2. I’m trying to keep one version of Dev purely natural, so I have to resist the temptation to tweak it with synthetics.

For some reason, Lil continues to prove a much easier subject than Dev. It’s technically easy to make a bright floral, and maybe I’m just not as emotionally invested in a perfume for the evil underbelly of femininity as I am for a loveable, leather-clad rocker. I have to admit it - I care very much for Dev. I want his perfumes to be as dark and assertive as possible, and nothing is good enough. I keep tweaking and tweaking, and am never satisfied. The labdanum keeps getting lost in everything else, not appearing until the late drydown. The leather doesn’t play nicely with the rest of the fragrance. I’m trying to use davana and finding that a tiny bit goes more than a long way.

The one promising thing is that the all-natural Dev has excellent longevity. I used a tiny bit of real ambergris tincture in it, and it must have magical fixative properties because I can still smell the base on my skin 24 hours later. I haven’t added the cinnamon leaf yet, because I’m trying to get the base right, but I think that getting some middle and top notes added to the mix is going to make a big difference. I’m still shooting for having three versions of Dev ready by the end of March.
Posted by Doc Elly at 10:48 PM