I haven’t been skiing at all this year and only once last year, but was lucky enough to get a couple of cheap lift tickets for night skiing, which starts at 3:00. This time of year, “night skiing” includes a lot of daytime skiing, too, since it doesn’t really get dark on the mountain until after 7:00. It was the right time to go.

Yesterday was a glorious, sunny day, so the drive up the mountain with my friends was spectacular. The lower slopes of the Cascades are covered with mossy, green rainforest-type vegetation, and with the sharp-toothed, snow-capped peaks in the background I was kicking myself for forgetting to bring my camera. I have always preferred to travel light and store the sights in my memory, but now I’m always thinking “photo opportunity for the blog”. One of these days I’ll learn to take my camera everywhere I go. Near the top, there are stratified walls of snow on either side of the highway.

The ski area is always like another world or another planet, but this weekend it outdid itself with 145+ inches (over 4 meters) of snow on the ground, bright blue sky, warm sun and – well, I might as well be honest – a layer of slush at the base and hard-packed snow and ice on top, full of potholes and gashes from the snowboarders, but who cares about snow conditions? It’s all good fun and I’d rather see the views and feel the first sun of the season than ski in the middle of a snowstorm with nice, fresh snow underfoot but no visibility.

It was both relaxing and awe-inspiring to watch the sun go lower, sink behind the mountain on the west while still shining on the peaks to the east, then watch as the sky darkened and a tiny sliver of crescent moon appeared in the west where the sunset was fading. The air was so clear that you could see the dark side of the moon, too.

Then it got cold. The slush at the bottom froze into ice. My teeth started chattering riding up the lift. We decided to go into the lodge for hot cocoa. Oh, what a treat it was to go inside where it was warm, drink the almost-too-hot, chocolate-flavored glop from the dispenser machine, and sit by the fireplace! It made me think of making a perfume based on chocolate and wood smoke. I think the two would go together perfectly.

Once we were warmed up and back outside again, the slopes were nearly deserted, so we practically had the mountain to ourselves. The sky was black, with Venus shining in the west above the moon, and the stars all out. This time it didn’t seem so cold. As I dropped gently down the mountain, I had the feeling that there’s nothing closer to the feeling of complete and utter freedom than to be on the mountain at night, swish-swishing down a deserted ski slope, feeling like I’m flying above the snow, my breath perfectly coordinated with the wide turns, the stars overhead, and the freezing wind in my face.

We skied almost until closing time at 10:00. This complete break from reality was exactly what I needed before the academic quarter starts again on Monday. And I have an idea for yet another perfume. 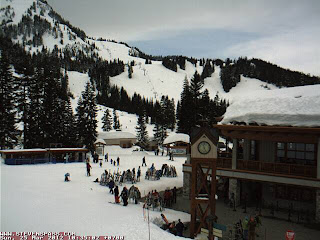 [Upper two photos, from Wikimedia show typical snow scenes in the Cascades; third photo, from Wikimedia, shows Stevens Pass, the area where I usually ski. The bottom photo is from the Stevens Pass webcam, showing the base area. It's overcast today, so the nice blue sky isn't visible.]
Posted by Doc Elly at 12:11 PM