WHAT ARE ARCHITECTS THINKING?

Every so often I'm struck by how bad design dictates how we live our lives, and how it gets perpetuated because people accept it as "the way things are". These design issues can be anything from malfunctioning perfume sprayers and uncomfortable clothing to bad urban planning and building design. Here's the first in what might grow to be a series on how design affects our lifestyles. 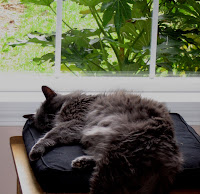 One afternoon last week when I was working in my office the power went off. Not too surprising given that we had a hurricane-like storm with high winds and heavy snow, followed by a clear, sunny “eye” that was followed by more winds, snow, and rain. What did surprise me was the huge fuss going on in the hallways. People were milling around, acting as if some major disaster had happened. The last time I heard such a commotion in the hallways was during the Nisqually earthquake when the whole building was shaking like crazy at about a magnitude 7.

At first I didn’t understand what was wrong, since my laptop with its battery was working just fine, and there was plenty of light coming from my window. However, once I went out in the hall, I was reminded that most of the building is windowless. The only rooms that have windows are those around the outside of the building, and there’s an entire core and basement that depends entirely on electrical power for light, even during the day. To make matters worse, I learned that almost everyone in the building uses desktop PCs that won’t run unless they’re plugged into a power source, so crowds of students, faculty, and staff were suddenly plunged into complete darkness without so much as the glow from a battery-powered computer screen. 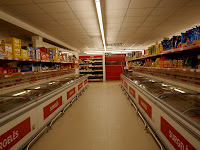 The building where I work was built in 1973 - not a good era for architectural design, but a precedent-setting one. It looks like a dark brick fortress from the outside. Inside, some of the walls are bare cement and others, until recently, were painted horrendous shades of orange, rust, mustard, and avocado green. Ugly as these design features are (or were), they’re cosmetic, and can be fixed quite easily. What really boggles my mind is the fact that the building is a huge 4-story square the size of a supermarket with the bulk of the rooms in the interior where there is not a single photon of natural light. I’m one of the lucky few who has an office with a window. Frankly, I don’t think I could have worked at this institution as long as I have if I had had to spend my days in a windowless room, especially one with fluorescent lights.

Next to all of the light switches in the building are placards admonishing us to “save energy – turn off the lights when you leave the room”. That’s all very well and good if we’re working at night, but the real question is why some mid-20th-century architects thought it was a good idea to make everyone turn the lights on during the day. This building is by no means ususual. Everywhere in the world there are public buildings, shopping malls, and even rooms in people’s private houses where there is no source of natural light. It’s ironic that when daylight saving time rolls around, people just go to work an hour earlier, turn on the lights, and burn them for the same number of hours that they would if they were in their normal time zone. I thought the idea was to save energy by not having to use artificial light in the early morning? Energy savings aside, there’s something cheerful and comforting about natural daylight and being to see outside, and something annoying and depressing about spending the day in a concrete bunker with no idea what’s outside. It’s no wonder the bureaucrats, geeks, and sales clerks in their windowless cubicles and big boxes are grumpy and unhelpful. It would be interesting to know how many health problems, both physical and mental, are caused or aggravated by working day after day in windowless spaces. It would also be interesting to know how much energy would be saved if every room in every building had windows to let in light during the day. Probably enough to light up Las Vegas at night for the next thousand years.

[Supermarket and bunker photos from Wikimedia. The cat is mine.]
Posted by Doc Elly at 10:34 AM