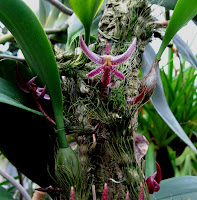 It’s Bulbophyllum season in my greenhouse right now, so a description of some of these bizarre orchids seems in order, especially since I have made a Bulbophyllum-inspired fragrance, Luzonica. Bulbos grow like weeds in Southeast Asia where they live as epiphytes on tree trunks and tree branches. The flowers are often pollinated by flies. If you think about what flies are attracted to, you can begin to imagine the typical scents of Bulbos - feces, dead meat, rotten fruit, mostly. A few have pleasant scents, although they’re not your standard florals. 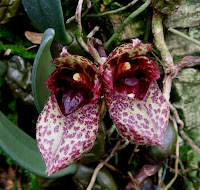 One of the species that I have blooming now is B frostii, with flowers that are usually described as being shaped like wooden clogs. They’re light green with maroon spots, and have a mobile lip that looks just like a maroon tongue. The purpose of the lip is to jiggle in the breeze and attract the fly, then act like a springboard and smash it up against the pollen, which sticks to its back. This pollination system is characteristic of the genus. The “fragrance” of B frostii orchid is like - you guessed it - rotten meat. 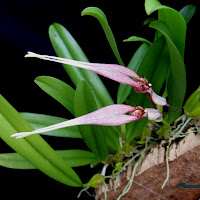 Another species that’s blooming right now is B biflorum, shown in the photo at the left. Actually it’s almost always blooming. The flowers look like long dark pink streamers and smell like - you guessed it again - rotten meat.

The third species that’s in bloom right now is B patens. It has shiny, dark maroon flowers that smell like - surprise - cinnamon! It's the one shown in the photo at the very top of this post. 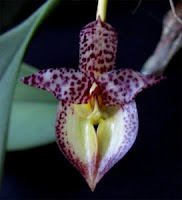 B macranthum is one of the Bulbos that smell like fruit. The first time it bloomed I walked into my greenhouse to find that the whole space smelled like tropical fruit salad, but fruit salad with a dark side. It took me a while to identify the source because this orchid has such tremendous sillage. To make a perfume based on this species, I used a mix of tropical fruit scents, a few tropical florals, and a pinch of funky spice and put it all on a base that’s not anything like your usual girly fruity-floral scent. The base includes “oriental” things like resins, labdanum, and amber, with some animalic notes thrown in by green spikenard and (synthetic) castoreum. It’s interesting that Luzonica seems to be well-liked by all of the men who have tried it so far. I suppose it could be described as a masculine fruity-floral. The effect of Luzonica in soap is interesting because it seems lighter and fruiter and “cleaner” than the fragrance itself. We are testing it in the shower now, and have been enjoying it very much. I think the light, clean fruitiness works well as a bath product, so I lucked out.
Posted by Doc Elly at 11:07 AM