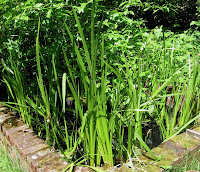 I like to try as many perfume materials as possible, not just because I like to smell new things, but because I never know where the next wonderful perfumery discovery will be. On this quest for new smells, I recently obtained some calamus root essential oil. Acorus calamus is a ubiquitous marsh plant known by the common name of sweet flag. The plant itself looks like a lot of other plants that grow in marshy areas. The flowers are strange spikes that look like an extremely fat ear of grain and not at all like the showy yellow flags (a type of iris) that I see growing all over marshy areas around here and blooming this month.

Ever since humans have been making fragrant products, the roots of Acorus calamus have been used in incense, perfumery, for medicinal purposes and, apparently, for their mild psychoactive properties. When I first smelled the oil, I hadn’t read much about it, and had ordered it more or less blind simply because it was unfamiliar. On the first inhalation, I immediately had a strange, lightheaded sensation that I have never had from any other essential oil. Repeated sniffing didn’t have the same effect - it seems there was rapid adaptation. However, after waiting a while, I can repeat the rush of smelling it for the first time. Fascinating. From what I’ve read, the psychoactive properties are supposed to require chewing and possibly ingesting fairly hefty amounts of the root and are questionable at best, so I really can’t explain the effect of sniffing the oil. The fragrance of the oil is light and sweet but at the same time a little nutty, a little bit bitter, herbal, and astringent, with an odor that is hard to describe in terms of other things because it is unique.

I’m sure that I will eventually end up making an all-natural perfume centered around calamus root oil. This seems like a worthwhile project for a number of reasons including the historical value of calamus in perfumery, the smell of the oil itself, and the odd effect that I find it has. Since I got my supply of calamus oil, I have been reading information on kyphi, an incense made by the ancient Egyptians, which used calamus root as one of the key ingredients. I think I’ll put all of the different formulas together and come up with a kyphi variation that takes the best of them all and adapts it to perfume form.
Posted by Doc Elly at 12:40 PM