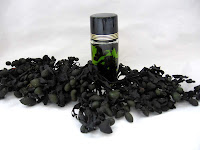 For a while now I have been fascinated by the possibility of making a perfume that truly reflects the scents of the ocean and the beach (no calone!). One of the components that I’ve been investigating is seaweed - the fresh, green, salty sort that is exposed at low tide. The first stage of my exploration was to buy a small quantity of seaweed absolute, made from Fucus vesiculosus, manufactured in France. The absolute smells wonderful, but it’s prohibitively expensive to buy retail and the company that sells it wholesale apparently does not respond to e-mail. 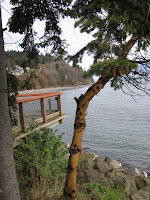 The other day when I was taking the ferry, I decided to go down to the beach and explore the seaweed situation, since there’s always plenty washed up, drying in the sun and emitting various kinds of odors. I gathered a big bag of seaweed from the beach, and then noticed that there was a lot of live, blackish-green seaweed growing on the rocks. I gathered some of that too, and when I got home, looked it up to see what it was. Bingo - Fucus vesiculosus, the same stuff that’s in the imported absolute, growing practically in my own backyard. It’s possible that some of it may be a hybrid with Fucus spiralis, but both are closely related species commonly known as bladderwrack. The exact ID doesn’t matter as long as it has a pleasant, ocean-like odor.

I dried the bladderwrack in the sun for a few days and then crumbled some of it into alcohol to make a tincture. Wow! It’s better than I had ever hoped. Not only does it smell as good as or better than the absolute, it is just as strong and the alcohol turns a beautiful, clear, emerald green. My plan is to make the perfume and use the seaweed tincture as the alcohol carrier. This way I’ll have a bright green perfume with a hint of sweet and salty seaweed. Now I have to figure out what the other beachy components will be, but I think that now that I have the seaweed tincture, with a reliable supply barring any undersea oil leaks, the biggest obstacle has been overcome.
Posted by Doc Elly at 10:25 AM