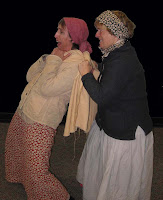 This week has been stressful, to say the least. Not only is it the last week of the academic year, but the play that I’m directing (A Gulag Mouse by Arthur Jolly) opens tonight in Seattle. The week leading up to opening is stressful enough when it proceeds without incident, but we lost an actress during the middle of rehearsals and replaced her with another one who was doing a fabulous job getting up to speed. On Wednesday she called me saying that she was in the hospital having major surgery! As director, I was familiar enough with the play, but watching and doing are two very different things. I did a blitz-through on the lines, blocking, and fight choreography, put together a substitute costume, and hope that I can stumble my way through the run.

As I try to de-stress after dress rehearsal last night while I dis-tress my now slightly torn costume with oil and bleach and a run through the washing machine before taking it out to the driveway, I can take a few minutes to reflect on scents and the theatre. Theatres themselves often do not smell very good because they’re old and dusty and filled with set pieces, props and costumes in various stages of decomposition. Overlaid on that there may be new (or recycled) wood and paint from the sets. Dressing rooms smell like make-up, hairspray, and whatever food or drink is being consumed. Sometimes sweaty bodies and clothes are added to the mix if the performance involves much physical activity.

I generally take these odors for granted until the show is over for the night and I leave the theatre, going from the noisy, bright, warm, emotionally charged atmosphere of the stage into the silent, dark void of the late-night streets with pieces of trash blowing in the cold salt wind and a light mist hitting my face. No matter how many times I make this transition it’s always a moving experience. It feels almost like birth, going from the close embrace of a warm womb out into the cold, indifferent world. Or maybe it’s more like death, going from the sensation-rich hustle and bustle of life into black nothingness. Maybe they’re one and the same. Two sides of the same coin. The top and bottom, right and left of the circle.
Posted by Doc Elly at 9:38 AM