THE LAST OF THE XERJOFFS 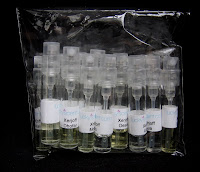 Yesterday I completed my testing of all 12 Xerjoff samples. Overall, I’m quite favorably impressed. There are several fragrances that I would actually buy if the prices were in line with those of other niche lines and if I were a person who buys full bottles of perfume. Neither being the case, I’ll probably just enjoy the samples while they last.

Here are the final reviews:

Xerjoff Dhajala
Unfortunately the little sample sprayer that Dhajala came in was broken or malfunctioning, so instead of a spray, what came out was a few dribbles that I spread around as best I could. This is probably not the optimal way to apply perfume, but at least I was able to smell it. Dhajala starts out a little bit citrusy, and a little bit sharp and aromatic from the galbanum and whatever herbal things are in it. As it develops, it takes on a unique, bittersweet scent with hints of rose and some other unidentifiable flowers and woody resins. It is supposed to have “Tonkiphora and Myroswellia balsam” at the base. I have never smelled either of these resins, so cannot judge whether they are present in the mix. Like the other Xerjoff creations, it’s a good perfume, but not worth buying the expensive packaging to get the stuff inside.

Xerjoff Shingl
This was another vial with a malfunctioning sprayer! Curses!!! However, the crammed spray top on this one was actually loose and falling off so that it was possible to get to what was left of the perfume after leakage. Luckyscent, you might want to rethink those spray vials. The first thing that I smell is an incredibly strong, dry, peppery iris note, so strong that nothing else could possibly make its way through. If there’s bergamot or anise in there, it’s completely stomped on by the bloated elephant of an iris. It’s wonderful if you like iris, but if you don’t, then watch out! After an hour or so, the iris becomes creamy as well as powdery and a little boozy - custard and rum flavored, to be exact, and it’s at this point that the scent really comes into its own. With time, Shingl mellows into a sensual, comfortable, leathery-ambery-fruity-musky scent that reminds me a little bit of the original Rochas Femme. Once this transformation happens, I can enjoy it for hours. It’s not really the same set of notes as Femme, but it’s the same genre, if that makes sense. At that point it’s one of those perfumes that provides an example of how I wish my skin smelled, but it was quite a journey to get there.

Xerjoff Lua
Starts off with a sweet and sparkly citrus note that persists as the flowers appear, primarily a light rose with slight hints of violet or iris and something unidentifiable as a specific flower but floral and very sweet. The vanilla-tonka base is there almost from the beginning. After a couple of hours I start smelling some sandalwood in the base. This is a nice, comfortable feeling perfume that is enjoyable from beginning to end.


Xerjoff Nio
Citrus, citrus, citrus! That’s what Nio shouts as soon as it comes out of the vial. It’s mostly natural-smelling fresh lemon peel, with a little orange peel, grapefruit peel, citrus flower and, of course, the compulsory bergamot thrown in for good measure. There may be a little sprig of lavender in it, to stir it around. After a few minutes some strong green notes appear, probably cedar or cypress leaves, and there’s vetiver supporting it all. I’m not usually fond of citrus + green scents, but this one is an exception. It’s strong and assertive, with plenty of character. The spices aren’t really evident individually, but I think they help round out the overall impression. For a scent in the “men’s cologne” genre, this one is exceptionally nice.


Xerjoff Dhofarr
Starts out like a citrusy, herbal-lavender, slightly sweet and soapy men’s cologne. It’s possible that what smells like citrus is actually the listed pine needle note mixed with other citrus-like things. It seems to have a pinch of cumin and/ or coriander in it and my initial assessment was that there is some vetiver at the base. However, on reading the notes and seeing that it contains “jatamansi”, it’s very likely that what gives it the cumin-vetiver combination is spikenard, which on its own provides an earthy-rooty-sweaty-cumin-like note. After a half hour or so the actual pine scent starts coming through, so there probably was citrus initially. Bergamot is so much of a given that they probably don’t even bother listing it in the notes. As the scent dries down, it becomes more and more of a typical “men’s cologne”, heavy on the lavender and cedar. The spikenard goes away, which is too bad since it provided an earthy note. At no time do I smell any labdanum or amber. Dhofar is well-made, but it’s not my style, since I’m not a big fan of lavender-heavy fougere-type fragrances.
Posted by Doc Elly at 1:37 PM