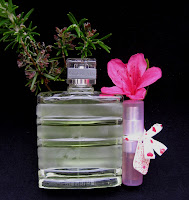 I’ve always been puzzled by the concept of “men’s” and “women’s” perfumes. Today I’m wearing the men’s version of Guerlain Vetiver and loving it. I haven’t tried the women’s version, but I can’t imagine it would be better than this. Guerlain Vetiver is similar to another “men’s” vetiver fragrance that I like to wear, The Different Company’s Sel de Vetiver, but richer. I also prefer the “men’s” version of Amouage Jubilation XXV, which, to me, is like blackberries, incense and amber. What’s masculine about that? Other “men’s” scents that I’ve recently tried and loved are By Kilian Straight to Heaven, with its strong retsina note, and Knize Ten, with its leather notes.

So what is it that makes a scent masculine, other than marketing? I suppose it’s the absence of in-your-face florals, but I see no reason why men shouldn’t wear flowery scents if they like them. They would be far preferable to the typical drugstore “men’s cologne” scent composed of synthetic lavender, cedar, and all too often my olfactory nemesis, “teak”. I used to work with someone who would come and sit in my office reeking of these things, contaminating the air for hours afterward. I really wish he had switched to roses or jasmine or orange blossoms or gardenias.

I’m not overly fond of true floral scents except on actual flowers. They have their place in creating perfume accords, especially the orchid flower scents that I’ve been experimenting with, but for my own enjoyment I like herbal notes, resins, incense, amber, woods, musks, leather, and the occasional odd and unexpected note. Does this sound like masculine scents? Sometimes I like fruity notes, especially black currant and fig, or gourmand notes like vanilla, coconut and spices. Now we’re getting into “unisex” territory.

In formulating my own fragrances, I really don’t think about whether they’re masculine or feminine, just about the concept and how to realize it. I do not plan to market them as being for men or women, but rather let people smell them and judge for themselves whether they’d wear them.
Posted by Doc Elly at 10:51 AM