PEONIES AND DESIGNING A WEB SITE 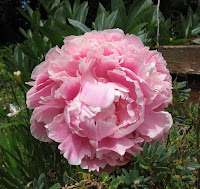 PEONIES. The two topics in today’s post don’t go together at all except that it’s the season for both of them. The peonies are in full bloom right now, with all of their different colors, shapes, and fragrances. Peonies are one of the first flowers that I remember from the garden where we lived when I was a preschooler. They were taller than I was, and the fragrance was intoxicating. That’s why, when we moved into the house where we live now, I planted peonies all around the yard. Single ones, double ones, red, pink, and white ones. The flowers are spectacular, especially now that the plants are well established, but the fragrance of most of them is a little disappointing. The only ones that smell the way I remember peonies smelling are the white ones. The others smell good, but not in the strong, sharp, achingly beautiful way that the white ones do. I know there are perfumes that are supposed to have a peony note, but I don’t think I’ve ever smelled one that’s like white peony (or the other colors for that matter). Peony scents are something that I need to explore more. 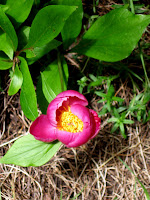 DESIGNING A WEB SITE. One of the necessary evils of doing business online is designing a website, entering all of the products, and putting it online. So far, I think the gestation of my website is fairly close to being on schedule, with a due date sometime around the end of June or beginning of July. I worked on it a lot today. For the initial version I opted for a no-frills template-based e-commerce site that I can put together myself. According to one well-known personality test, I am type ENFP, which means that I an extroverted, intuitive, feeling and perceiving, in other words lazy and sloppy with little or no tolerance for geeky activities, especially ones that require writing code in HTML, sending files by FTP, or worse. 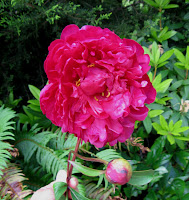 For my website I chose the least evil-looking of the templates that the host company had to offer, a bland lavender and white thing that seems excessively stark and businesslike, but better than the brown and hospital green alternatives. The only artsy thing about the design is the photos that I put in as illustrations, so maybe I should try to generate a lot of purple prose to match the website’s color scheme. As soon as I can phone the host company on Monday and find out why some of the prices I’m putting in are being rejected, I think I can have the site up and running within hours, or days anyway. At least the tech support people for this company aren’t in the Philippines as they are for the company that hosts my orchid plant website, and they haven’t been trained to give customers one of three irrelevant answers that they randomly read off a card. I’m looking forward to the grand opening of my perfume website within the next few weeks.
Posted by Doc Elly at 9:59 PM