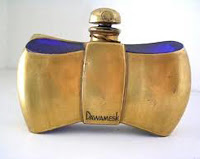 When The Perfumed Court offered tiny samples of Guerlain's Dawamesk for sale, how could I not be reeled in hook, line, and sinker? A perfume named for an edible hashish product is not to be missed, even though I’m fully aware that it’s likely to be, in some sense, a disappointment. A quote from Baudelaire’s Les Paradis Artificiels describes dawamesk (the real stuff, not the perfume) as being made from a fatty, sugary base seasoned with vanilla, cinnamon, pistachio, almonds and musk and, of course, containing a goodly amount of hashish. Sometimes it even contained “cantharides”, an extract from a beetle otherwise known as “Spanish fly”, which was the Victorian precursor to Viagra. Dawamesk was the original hash brownie deluxe, a spread that could be used on bread, mixed into a cup of coffee, or otherwise ingested for a trip to some artificial paradise.

The fragrance Dawamesk, released by Guerlain in 1942, has long been discontinued, no one seems to know exactly when, but so long ago that the rare bottle one occasionally sees for sale on E-Bay is empty. So what does Guerlain’s Dawamesk smell like? Well, for starters, it doesn’t smell like hashish, nor does it smell like most of the things on Baudelaire’s list of ingredients. It starts off smelling like a vintage floral, rich and sweet, but at the same time light and cheerful. I get something that might be indolic orange blossom, ylang-ylang, heliotrope, and possibly some other floral notes that blend into the general mix. The flowers are all on a rich vanilla base. The opening volley of sillage is absolutely gorgeous, even to someone who doesn’t like floral scents. As it dries down, the indole gradually retreats, allowing a hint of cinnamon to come through, along with progressively more of the heliotrope and some faint, abstract, woody notes. After about 8 hours, all that’s left is a slightly spicy, woody, musky skin scent. I don’t know the concentration of my sample, but its overall strength and indolic assertiveness are typical of a vintage fragrance. 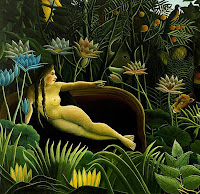 Guerlain’s Dawamesk is not the buttery, sugary spread on the baguette, but rather a cinnamon-flavored, hallucinated trip to a flower-filled tropical island, a quick and convenient getaway from the damp cold, mold, and squalor of a 19th-century Parisian artist’s garret in the winter. My sample was only 0.25 ml, but I’ve had over 8 hours worth of enjoyment from a tiny dab that made no visible dent on the juice in the vial. Was it worth it? I think so.
Posted by Doc Elly at 11:53 PM