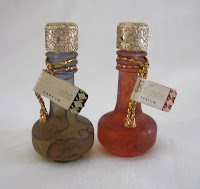 It was exciting to find two bottles of Judith Muller’s Bat-Sheba on sale for a price that didn’t break the bank, even with international shipping, so I snapped them up. Bat-Sheba perfume was made in Israel starting some time in the 1960s, and discontinued some time in the 1980s, so bottles that still actually contain the perfume are quite a find.

The first bottle was exactly as described, a full 2 ml mini bottle of the parfum concentration in perfect condition. The bottle is hand-painted, bluish colored iridescent glass, made to look like an archaeological artifact. The screw-cap has a cracked gold finish, and around the neck of the bottle is a gold tie with the name tag. The second bottle was not the 7 ml of EdT that I thought I was buying. Instead, it is another completely full 2 ml parfum mini, but in a reddish-orange colored bottle with the same shape, patina, and tag as the first one. Interesting.

The solution, of course, was to try one on each wrist, blue on the left, orange on the right. Since these perfumes have been discontinued for over 20 years, I have no idea whether they still smell the way they did back in the 20th century, but they’re both unique. I think what impresses me most is that they match the bottles so perfectly, creating the impression of ancient perfumes that were discovered in an archaeological dig, perfumes that have hunkered down and survived underground for thousands of years, ever since they were used by a long-dead bathing beauty. I’m blown away!

Both perfumes have an odd, dusty, musty base that reminds me of earth, stone, sandalwood incense, and wood that has been preserved by a desert climate for millennia. On top of this common theme, the perfume in the blue bottle is spicy, with cinnamon, dried roses, and other things that I can’t begin to identify. The perfume in the orange bottle is softer and fruitier, with anise-like notes. Both are absolutely unique and both are lovely in their own way. As they warm up on my skin, they produce an amazingly beautiful combined sillage. Jaded perfumista that I am, it’s not often that a perfume evokes deep emotions, but these two manage to do it.

Maybe the thing that moves me the most is that, without intentionally doing so, I am wearing both of these perfumes on mother’s day. Could it have been a subconscious desire to celebrate the fact that my mother realized her lifelong dream of visiting Israel a few years ago, shortly before she became too sick to travel? This trip was all she wanted to talk about on my last visit with her, so her memories are fresh in my mind.

So on this mother’s day 2011, I’ll celebrate my mother’s life, her memories, and the serendipitous enjoyment of two surprising perfumes that have unexpectedly come to symbolize my mother and her dreams.
Posted by Doc Elly at 10:52 AM