TO LAST OR NOT TO LAST? THE QUESTION OF LONGEVITY 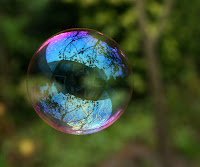 Although there’s the occasional surprise, I’ve gotten pretty good at predicting how long a given perfume will last once it’s applied. The intuitive rule of thumb is that the less I like it, the longer it will stick around, but there are some exceptions, just as there are some semi-scientific principles at work, too. All-natural perfumes at low concentrations are almost guaranteed to give up the ghost within a couple of hours regardless of how much I like or dislike them. The cheapest, all-synthetic perfumes are almost guaranteed to sink into my skin like the sucker of a hungry leech and never let go, even if they’re supposedly EdCs or EdTs. However, there are a few leeches that I can’t get enough of, and am perfectly happy to let live out their entire parasitic life cycle on my skin. 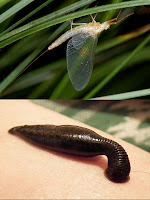 When I test perfumes now, I choose according to how much time I want to devote to one scent. Fragrances that I think will be loud and persistent, I put on in the morning when I know I don’t have to face people at work, and when I know I can do an emergency scrub to abort the mission if necessary. Ones that are gentle and natural, I’ll put on in the evening or at a time when I’m going out and don’t want to offend anyone with second-hand Angel, Broadway Nite or other sillage monsters. I’ve come to appreciate both extremes, the fleeting, transparent soap bubbles and ephemeral mayflies as well as the noisy guests that simply don’t know when to pack up and leave. I also appreciate all of the nuances in between.

If I had to commit, I would say that I like perfumes to fall somewhere in the middle, strong and tenacious enough to really smell, and present for long enough for me to truly enjoy their evolution. If it’s a perfume that I wear to work, I’d like for it to last all day, at least as a skin scent that I can distract myself with. In general, I don’t like overly strong perfumes that blast my nose for a full day and then stay on my clothes through multiple washings. Having said that, however, there’s something magical about detecting the residue of a perfume on clothing or on a towel, days or even weeks after I wore it. 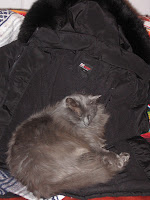 A few weeks ago, I was surprised to smell a gorgeous musky scent of one of my sweaters that I’d thrown on a chair and left there for more time than I’d like to admit. My cat had slept on it, I’d piled more clothes on top of it, and the cat had then slept on the ever-growing pile of clothing like the princess on the pea. I couldn’t remember which perfume I’d been wearing along with the sweater, but I longed for more of it! I think it may have been Black Cashmere, or Musc Ravageur, or both in succession, but I still haven’t figured it out. Maybe the weight of the sleeping cat was a catalyst that turned the perfume residue into something wonderful, just as the weight of the earth turns coal into diamonds.

Another experience with longevity was the other day when I smelled a wonderful scent on the towel I was using. I easily identified it as ambroxan, and I think it got on there when I had been mixing up or bottling some ambroxan and wiped my hands on the towel. I’m pretty sure the towel had been through several washings since the incident with the ambroxan, and I think the washing significantly improved the scent.

The third incident is probably the most amazing of all. Almost a year ago when I was in the duty-free shop during one of my trips (the duty-free perfume section is a stop I never fail to make if there’s time), I sprayed some of the new Samsara on my wrist because I was curious how it compared with the old version. Days later, I realized that I could not only still smell the sandalwood base on the plastic band of the watch I was wearing, it was even dispensing a large aura of sillage. Samsara has become the signature scent of my watch, without my ever having to reapply it. That one spritz over a year ago is still detectable on the watch band, every time I put it on. When I’m in a meeting and bored, I sniff my watch band. The bonding of that scent to the plastic was nothing short of incredible.

[Bubble, mayfly and leech photos adapted from Wikimedia]
Posted by Doc Elly at 9:23 AM