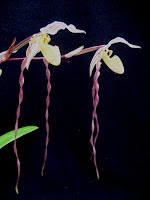 One of the cool things about growing orchids is watching the flower buds grow, develop, and open up. Inside the bud, the long, thin, dangly petals of some slipper orchids may be folded up like an accordion, suddenly dropping down to extend the length of my forearm or even longer once they’re released. Where and how the pouch is folded, I still don’t understand. Some of the cattleya orchids have their frilly lips all tightly packed and bundled up inside the bud, to be released in a mini-explosion once the time comes. 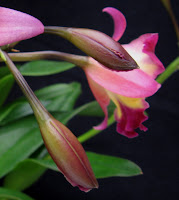 I remember one incident when I was sitting at my desk working, with a cattleya in bud sitting on a shelf, off to one side. As I was typing, I thought I saw something move, out of the corner of my eye. Then it moved again. It was the orchid. One of the buds visibly opened up as I watched it. I felt like I was watching one of those time-lapse films speeded up, but this was in real time. The sepals popped open with a tiny audible sound, and the much larger petals and frilly lip unfolded before my eyes.

The fragrance of many orchid flowers, especially cattleyas, changes over the course of their bloom. A great many cattleyas start out smelling indolic and camphorous, with the floral scent developing over the span of a few days. Sometimes even the floral scent switches from one fragrance during the day to a completely different one at night. As the flower prepares to die, it takes on yet a different scent, a little bit woody, with some green tea notes.

The saga of the Golden Cattleya continues. I originally made three different test versions, which I sent out to a few people. Without my consciously intending to do so, these three versions mimicked the life cycle of a cattleya flower. The perfume that I currently sell is the middle one, the most floral of the three.

Gail liked the skanky version #1 (GC1) so much that she has inspired me to remake it to more fully emphasize the indolic, camphorous notes that cattleyas put out when the flowers first open, before the mature floral scent fully develops. I’m thinking of calling the finished version Emergence.

A few days ago I worked on the new base for Emergence, keeping the civet and labdanum that were in the original GC1, but adding a few things, especially some indolic and camphorous stuff. To begin with it smelled excessively strong, but now that it’s settled down for a few days I think it’s going to work. Now for a slightly modified upper half, and Gail will get to test it!

Inspired by Tarleisio’s comments, I’m going to reformulate the third version (GC3) to represent the final stage of the cattleya flower and call it Memento Mori, the name that she suggested. These three perfumes will eventually form a suite that provides snapshots of the cattleya flower from birth to death.
Posted by Doc Elly at 10:09 AM