I think myrrh may be an acquired taste. The first time I smelled it, I didn’t like it at all, but I’ve since come to love and appreciate it. It may also be that there are so many different varieties that it’s necessary to sort through them all before finding the ones that are most appealing. I thought of doing a post on myrrh after trying a sample of Ayala Moriel’s Film Noir, which contains a whopping amount of myrrh in the base. She combines it with chocolate, coffee, cardamom, and some other good things for a perfume that starts out as a pure gourmand and ends up as chocolate flavored myrrh. I love it, especially since it’s a welcome change from her usual culinary herbal blends.

Myrrh is the resin of a thorny desert shrub of the genus Commiphora. The “standard” myrrh is from C myrrha, which grows on the Arabian peninsula and parts of Africa. It has an unmistakable, bitter, resinous, earthy, phenolic, almost animalic and leather-like scent that I’ve come to know and love. I think the tipping point for me was when I was sent a sample of raw myrrh resin from this species along with some other things I'd ordered. I decided to tincture it, and was blown away by how lovely the tincture smelled.

True opoponax is also a type of myrrh, coming from the species Commiphora erythrea or Commiphora opoponax, which grows in the same geographic range as C myrrha. It is a sweeter, more aromatic and incensey version of myrrh, and for that reason is sometimes called “sweet myrrh”. Because it’s sweeter and more conventionally “perfumey”, it makes a good entry-level introduction to the world of myrrh fragrance. Apparently there is also a plant called Opoponax chironeum that grows in the Middle East and Mediterranean region, which is used to produce a resin that is, confusingly enough, also called “opoponax”. To my knowledge, I have not smelled it, but it is reported to be “balsamic” in scent and similar to vetiver. I think the bottom line is that there is a huge amount of confusion as to what is meant by “opoponax”, and there is no telling what sort of opoponax is in your perfume or the essential oil you buy unless the genus and species are specified.

Another type of myrrh is guggul, also known as “bdellium”, which comes from the species Commiphora mukul or Commiphora wrightii. It is endangered in the wild due to over-harvesting, but is now cultivated commercially in northern India and Pakistan, since it is a popular herbal medicine and is used in dhoop-type incense. Guggul resin is the darkest of the three. I have not smelled the essential oil, but judging by the resin, it seems similar to opoponax. 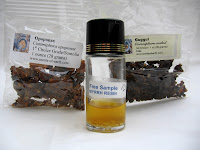 Myrrh is one of the materials that I almost certainly plan to use in the “mystery perfume”, and will definitely use it in some others that are on the drawing board. There’s myrrh in Kingston Ferry, and of course it’s in Kyphi. In the soap version of Kingston Ferry, the myrrh has a surprisingly strong presence, almost giving the impression of bathing in a lake or swimming on a seaweed-strewn beach.

[Botanical illustration from Wikimedia]
Posted by Doc Elly at 12:26 PM