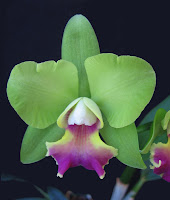 As in perfumes, citrus scents are popular among orchids. Most cattleya fragrances include at least a touch of citrus, with everything from bergamot and lime though lemon, grapefruit, orange, and orange blossom being represented in one form or another.

This week I brought in a hybrid cattleya that was blooming in the greenhouse, Blc Mem Shirley Moore. Its color varies considerably from year to year, sometimes being more on the yellow side, other times more green. The picture is from last year, when the petals and sepals were a bright lime green and the lip a bright purple, suggesting that one of its ancestors was Cattleya bicolor, a species with this color combination. This year both the petals and lip are more on the yellow side, maybe because the winter was colder than usual. 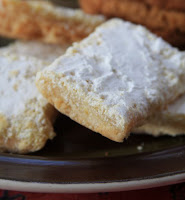 In any case, this cattleya has a powerful fragrance that smells like a traditional US dessert called lemon bars. Lemon bars are basically a flour and butter crust topped by an exceedingly rich combination of lemon juice, eggs, and sugar. The orchid has that same rich, sweet, lemon custard scent, but it adds a little vanilla to the recipe. It’s a real clock-puncher that only puts out its scent for a few hours in the morning, but when it does - wow! It smells good enough to eat.

This one won’t end up as a perfume, just because it’s pretty much a straight gourmand interpretation of lemon. On second thought, has that been done in a perfume? I can’t remember smelling one, since most lemon-themed scents are colognes. Anybody have a favorite lemon gourmand scent?

[Lemon bar photo adapted from Wikimedia]
Posted by Doc Elly at 11:39 AM