VANILLA - PLAIN OR NOT SO PLAIN?

Vanilla is one of those flavorings and scents that we take for granted. The expression “plain vanilla” is used to describe something ordinary and banal. Vanilla often doesn’t get the respect it deserves, in food or in perfumery.

Real vanilla comes from the seedpods of a genus of Central American orchids, so right away you can see that it’s not so plain after all. Most natural vanilla on the market is from the species Vanilla planifolia, which is now mostly cultivated on Madagascar and Réunion, and is commonly called “Bourbon” vanilla, after the old name of the island of Réunion. Bourbon vanilla has a characteristic rich, custard-like scent produced by an ensemble of literally hundreds of different types of molecule. “Tahitian” vanilla is a different species, Vanilla tahitensis, which smells sharper and a little more floral than the Bourbon variety. “Mexican” vanilla is yet another species, Vanilla pompona. I really need to get some of this and smell it to see how it compares to the other two.

The vanilla orchid grows as a large, vigorous vine. I have a planifolia plant in my greenhouse, which never gets large enough to flower because I keep chopping off cuttings to give away or sell. The plant never fails to cooperate, growing more biomass, trying to expand all over the greenhouse. One of these days I may decide to let it do its thing and flower.

Despite the fact that a high percentage of perfumes contain a vanilla note, vanilla is not an easy material to deal with in perfumery. I first learned that years ago when I was using commercial fragrance oils in my early soap-making experiments. None of the fragrance oils called “vanilla” really smelled like vanilla. They all had some aspect of vanilla, but there was so much olfactory noise that it was hard to get to the heart of the vanilla scent. There were all sorts of variations like “vanilla bean”, “warm vanilla sugar”, “Tahitian vanilla”, “exotic vanilla”, “delicious vanilla”, “vanilla butter cream”, “vanilla taffy”, … well, you get the picture. At the time I was buying in small quantities, so as soon as I found something marginally acceptable, it would be discontinued or the formula would change. I could never find anything that smelled like real vanilla.

Creating a good, true-to-life vanilla accord from scratch is not a trivial undertaking. This post would get too long if I wrote about it now, so will save that for another day when I write about my adventures in building a better synthetic vanilla.

One obvious solution to the problem of getting a good vanilla note in perfumery is to use real vanilla. There are vanilla absolutes, vanilla oleoresins, and the vanilla beans themselves, which are easy to tincture. The problem with vanilla absolutes is that they’re very expensive, making them hard to fit in the budget of a perfumer trying to make affordable fragrances. Another problem is that they are primarily water-soluble, which means that they are difficult to use in an alcohol- or oil-based scent. Pre-diluted vanilla absolutes generally do not say what the carrier is, and more often than not they create more problems than they solve. A while back I obtained some vanilla oleoresin, which is also supposed to be somewhat water-soluble. The fragrance is wonderful, rich, and custard-like, just like Bourbon vanilla extract. It’s less expensive than the absolute, but still difficult to work with. It appears to be soluble in alcohol at high concentrations, but as soon as the concentration goes lower, some of the water-soluble components separate out. My approach is to let this separation happen, allow the whole thing to sit for a while until the molecules that are soluble in organic solvents get extracted, then pour off the alcohol phase. 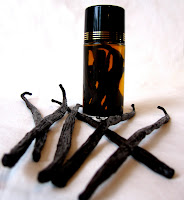 A simpler approach is to just make a tincture of vanilla pods, which produces essentially the same thing as tincturing the oleoresin, but with less mess. I am the proud owner of a pack of Madagascar vanilla pods, some of which I am tincturing. I have to say that, as an orchid breeder, I feel a little sad to see the potential offspring of orchid plants used in this way, but I just harden my heart, slice open the vanilla pods, and callously drop them in the alcohol, where the poor little dust-like seeds drop to the bottom of the jar. Within a couple of days the alcohol is already brown in color, and smells exactly like Bourbon vanilla extract. My plan is to use the resulting tincture as the solvent for the vanillin and other materials that I use in my synthetic vanilla accord, combining the best of both worlds.