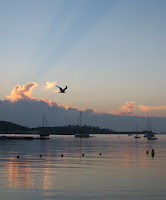 This morning, while browsing through items in one of the obscure online groups I belong to, I happened upon one of those all-too-common articles that misuse statistics to make a point, or just plain misunderstand the data. The article was about the high percentage of American workers who feel overworked, a point with which I cannot disagree. What I did find strange was the author’s assertion that people who work early in the morning feel less overworked than those who work later in the day and that “productivity is very much (sic) in the early morning and decreases as the day passes”. It’s the wagging finger of the old Puritan “early to bed and early to rise” philosophy still bumping around in its chains, haunting the business community.

When I looked at the graphic that purportedly supported this assertion, what I saw was a first-grade textbook drawing of a stylized songbird and owl, downloaded from some stock graphics site, asserting that “early birds” feel less overworked than “night owls”.  Now this I believe, if we are to assume that the terms refer to those who like to wake up early in the morning versus those who like to sleep in, and that both groups have to report to work early in the morning. Surprise, surprise! Having to be at work early in the morning is not good for you if you're not an early riser by nature!

As a “night owl”, I feel extremely stressed if I have to be anywhere before 10:30 AM. I’m fine with working until 10:30 at night, or later. If I had to be at work early on a regular basis, I’m sure that it would lead to feelings of being overworked, even if I put in the same number of hours as I would when starting later, or even if I worked less. A couple of weeks ago I had to be at an 8:00 AM meeting. At this time of day the 20-minute commute from my house to the university stretches to well over an hour even if there is no rain or other perturbation in the traffic flow. This meant that I had to leave my house before 7:00 AM to make it to the meeting on time. To do so, I needed to get up before 6:00 AM in order to have my morning ritual of drinking good coffee, reading my e-mail and skimming through the news, showering, getting dressed, and waking up enough to drive safely. Forget running, or inspecting my orchids, or testing a perfume, or writing, or anything else that I like to do in the morning while slowly waking up.
At this time of year in Seattle, it's dark until 8:30 AM, later if there are heavy clouds and rain. There’s something perverse about having to get out of bed before it even starts to get light. There’s something sadistic about making little kids wait for the school bus at some ungodly early hour of the morning, standing in the cold and the dark and the rain, yanked out of bed by a society that doesn’t want them to lie and dream, for fear they should have original ideas, or sit and think, for fear they should question the values of the society in which they live.

There’s a reason why owls are symbolic of wisdom. They keep their own hours and make no apologies for it. 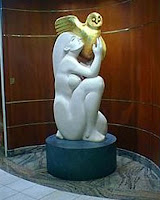 There are times when I complain about the academic life, but that morning, driving in first gear in the pitch dark on clogged streets and a clogged freeway, I was feeling infinitely thankful that I don’t have a job that requires me to report to a workplace early in the morning. I tend to forget that most everyone in Seattle who has a job is on the road between 5 AM and 8AM, scrambling to get there on time. I also forget that those same people are all on the road between 3PM and 6PM, scrambling to get back home so that they can unwind from the stress of their commutes by watching some mindless TV show and going to bed early so they can get up and do it all over again the next day. That morning on the road I vowed never to feel discontented with my job again. I was happy to spend last night grading the last dozen or so term papers and submitting my fall quarter grades online around midnight. That’s how we “night owls” like to work! We would all be healthier and happier if we could set our own work hours rather than being shoved into the “early birds” box and told that we would be happier if we would just conform and climb into the torture device with everyone else.

[Bird-owl stylized graphic handed off like a relay baton from whatever anonymous source it originally came from; bird at sunrise, school bus, traffic jam, and modern statue of Athena with owl all adapted from Wikimedia]
Posted by Doc Elly at 10:35 AM