Given that it's the solstice season, when people bring greenery into their homes to try to counteract the depressing effect of the short days (in the northern hemisphere, anyway), it seems good to continue the series on coniferous evergreen natural materials for use in perfumery. To me, pine seems like the most “basic” of evergreens, at least from a gardening point of view, so I'll start with that. Pines grow pretty much everywhere except the tropics, their wood is used for paper and cheap furniture, their smell is associated with cleaning products and air fresheners, and they generally get no respect. 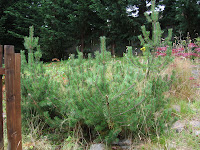 On my property there’s a bristlecone pine that was released from bonsai-bondage when it became apparent that it didn’t want to live that way, and is now growing as a regular tree, enjoying its freedom. We love that tree. There’s also a mugo pine (photo at left, taken when it was younger and cuter) that was planted at the back of the garden with the understanding that it would be a miniature, but it has expanded to cover an area the size of my studio and is more than my height. I’ve trimmed it back fairly severely a few times and am now debating what to do with it. I suppose I could try to make it into one of those clipped-poodle giant-pseudo-bonsai monstrosities that are so popular in certain neighborhoods in Seattle, or I could let it take over the entire back slope and push the adjacent fence down, or I could get rid of it entirely. Any votes or suggestions? 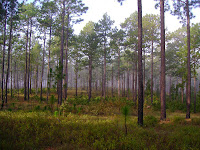 Long leaf pine, Pinus palustris, is to me the most basic pine there is, probably because I lived for a number of years in North Carolina, where it was such a normal feature of the landscape that no one paid any attention to it. The dropped needles were called “pine straw”, and used as garden mulch. Longleaf pine grows all over the southeastern United States. It is fire-resistant, surviving where other types of trees burn, resulting in large stands of nothing but longleaf pines. The essential oil of longleaf pine needles smells exactly like the fresh needles. If you’ve ever chewed fresh pine needles as I often do when I get a chance, that’s what longleaf pine smells like. It’s not a turpentine-cleaning product smell, but rather a gentle, green pine scent, like bringing fresh-cut pine branches into the house. As it dries, it gets even sweeter and gentler, and almost floral in nature. I used it as a top note in Carolina, to give a feeling of being near a longleaf pine forest. 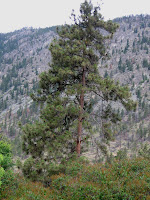 Ponderosa pine, Pinus ponderosa, is one that I’ve written about before, and is probably my all-time favorite pine species. It grows all over the western part of the US, and even up into Canada, like the tree in the photo on the left. Like other pines, the ponderosa trunk is always leaking a little resin. While other pine resin smells pine-y, the ponderosa trunk smells like vanilla and caramel, with just the slightest hint of dry, woody pine. The essential oil is the main note that I used in Arizona, building around it to produce a fragrance of the high desert. The oil isn’t as strongly gourmand as the resin, and has a distinct, almost floral, anise-like smell along with the vanilla and pine wood. Just smelling it, you would probably never guess that it was pine. 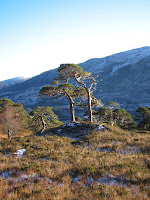 I love the smell of dry pine needles baking on the ground on a hot, sunny day.  I recently acquired some pine needle absolute made from French Pinus sylvestris. Looking at it in the jar, it’s an ugly, black, tarry mass, but when spread in a thin layer, it’s bright green.  When I put it on my skin, at first it smells something like a strong version of hay absolute, but after it sits for a while it develops a fragrance that’s similar to dry pine needles baking in the sun. It’s beautiful, and I think it’s going to be a useful addition to my stash of natural materials. A common name for Pinus sylvestris is Scotch pine. I have the essential oil of Scotch pine from Hungary, which has a reasonably pine-y smell. Like some of the others, there are odd food-y notes at the beginning, reminding me of raw bread dough. The sillage is pure, fresh-cut pine, though, with just a hint of anise and turpentine. 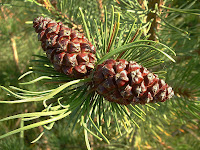 Then there’s the infamous mugo pine, Pinus mugo, which goes under the euphemistic name “dwarf mountain pine” when it’s made into essential oil. It’s sharper and woodier than longleaf pine, and smells pretty much like the branches I whack off of my backyard mugo pine when it gets too exuberant. Beneath the pine smell there’s a dry, woody, sawdust scent and an odd, juicy note that reminds me of raw carrots. The carrots go away after a while, leaving a dry, almost smoky scent of sawdust, like wood that’s been sawed with a power tool that burns it a little. I’m not sure what I’ll do with this oil, but I’m confident that I’ll find a use for it eventually. Maybe I’ll make a perfume called “Things you shouldn’t plant in your garden”, or “Le Jardin Interdit”, or “The Garden of Forbidden Plants”, with notes of mugo pine, English ivy, Himalayan blackberries, salal, timber bamboo, and grass.

Ocean pine essential oil, also called commercial pine, from French Pinus pinaster, has an even stranger smell than mugo. It smells a little like pine and a little like wood, but it also has an odd, weedy note that’s like unpleasant roadside vegetation that I’ve macerated and rubbed around on my skin, then left to stink up my hands.  Rubbing myself with leaves is something I do all the time, so I know all about stinky roadside weeds. As it develops, I smell a note that reminds me of isoamyl salicylate, the fragrance molecule that seems to want to suck my breath away. I can’t imagine how I would use the ocean pine oil, but one never knows. Its turn will come.

Swiss stone pine, Pinus cembra, is absolutely lovely. It’s got a resinous, green, woody, aromatic scent that reminds me more of fresh-cut Christmas trees than any of the other pines do. It’s by far the most resinous of the lot, almost like fresh pine resin mixed with a little Indian frankincense, Boswellia serrata. As it develops, it adds some fairly strong floral notes. I have plans to use it in a woody, forest composition sometime, and I can well imagine that it will get even better as it ages. Pinus cembra, like Pinus ponderosa, could almost be a stand-alone perfume.

None of the pine essential oils or absolutes really smell like cleaning products or turpentine, and they all smell very different, even though they could probably all be identified as pine, at least with some heavy prompting. As I write, I have four different ones on my arms and wrists, and the contrast is amazing, like four very different perfumes. They only last a few hours, so work best as top notes. I think the pine needle absolute lasts a little longer, so would probably make it through to at least the midpoint of a perfume drydown.

[Photos of wreath and all pines except mugo and ponderosa are from Wikimedia]
Posted by Doc Elly at 12:17 PM