THE COOLEST KIDS IN TOWN: INDIE PERFUME AT BLACKBIRD IN BALLARD 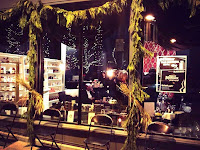 Last night was the kick-off event for the Northwest Indie Perfumers’ Circuit at Blackbird Apothecary in the Seattle community of Ballard. As Blackbird owner Nicole Miller observed, we were without a doubt the coolest kids in town. So cool, in fact, that people passing by on the street dropped in to see why we were having so much fun. 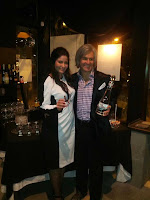 The concept is to have a monthly event in which the work of a Northwest perfumer is featured. Each perfumer will create a fragrance called Blackbird, and will have their regular line displayed in the shop for the entire month. The first perfumer to go was Christi Meshell (photo, left), of House of Matriarch. Her Blackbird fragrance was beautifully displayed in crystal bottles of various sizes as well as roll-on dispensers. The juice itself was dark, sort of a transparent purple-black color. It was reported to contain over 100 natural materials, including oud. It seemed to be quite well-received by those who sniffed it. This new scent, along with Christi’s other fragrances, will be on sale at Blackbird for the month of December, so if you live in Seattle, this is your chance to visit Blackbird and test-sniff all of her creations. 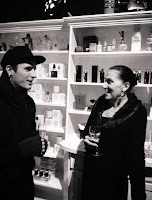 The shop was festive-looking, with lights, decorations, plates of food and chocolates, and a small bar serving some amazing drinks. The space was packed with a big holiday-spirited crowd, all having a great time. The co-sponsor of the event was Wine World, a local retailer of wine and spirits. They have tastings on a near-daily basis, so if you live in the Seattle area, go check it out sometime. I intend to do so. The highlight of the bar was an amazing grape vodka made by Glass Distillery, another local business. Christi has been working with them on cocktails flavored with a mix of essential oils, which are sprayed into the glass from “perfume” bottles before adding champagne or vodka. I tried the one called “Air”, which was mimosa and galangal, and later the one called “Water”, which was jasmine and something else. Both were tasty, and a really fun concept. Their Kona coffee-flavored vodka was also excellent. 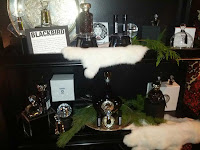 There’s something magical about spending an evening mingling with a lot of perfumers, perfumistas, and people off the street who want to learn about perfume, drinking unique cocktails, eating tasty tidbits, and spraying and dabbing ourselves with all manner of fragrant potions. I ended the night covered with Christi’s Blackbird, Montale White Aoud, Montale Chocolate Greedy, Mesha Munyan’s osmanthus tincture, and several of Christi’s other fragrances. The series is off to a fantastic start.

[Photos by Nicole Miller or Christi Meshell, used with permission]
Posted by Doc Elly at 8:54 PM