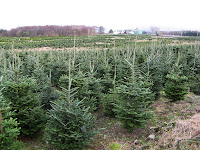 You almost never see a pine tree sold as a Christmas tree, but there are plenty of firs out there on the cut-tree lot. I suppose the good thing is that they’re grown on farms, like vegetables, so are a renewable resource, helping suck up a little CO2 while they’re growing up enough to be strapped to the top of an SUV and hauled home to slowly dehydrate there if they didn’t already do so in transit from wherever they grew. 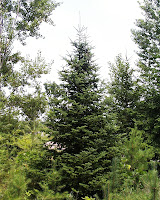 Balsam fir, Abies balsamea, is native to the northeastern part of North America. It’s a popular species for Christmas tree use, due to its symmetrical shape. The essential oil made from the needles of Canadian trees has a typical fresh, ethereal, cool, evergreen scent, sharp and resinous, but relatively fleeting as a top note. As it dries down it becomes a bit sweeter and woodier, but that phase disappears quickly. Fortunately, I also have fir balsam absolute, which is a sticky, olive-green resin. The scent is much heavier, thicker, richer, and sweeter than the oil, with better longevity and persistent sillage. It conveys the smell of both the cut wood and the needles, providing a beautiful warm impression of Christmas greenery.  As it dries down it changes from the moist scent of a fresh-cut tree to a truly delicious scent of newly-cut lumber, with a faint smoky note of the friction from the saw, but it’s more than just lumber. There are nuances of sun-warmed pine needles, clover, hay, and dried fruits. It would make a lovely addition to any woody or forest scent. 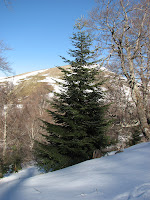 Silver fir, Abies alba, is the European Christmas tree fir, common throughout the mountains of Western Europe. It looks like a typical fir tree, symmetrical, with upward-facing cones. The essential oil made from the needles of trees in Austria is similar to Abies balsamea, with fresh evergreen notes, but is a bit more camphorous, warmer, and more aromatic. It has a green, vegetable-like note that balsamea lacks, and better longevity. I don’t know if this difference is due to the source and distillation methods, or true species differences. In any case, the scent on my skin lasted for hours, including a 45-minute run wearing gloves that rubbed against it. After a few hours, the scent is lighter and thinner and more like fresh pine needles, but it hangs in there all day.

Templin is an essential oil made from the cones of Austrian Abies alba – an evergreen cone scent.  It starts out with a sharp, varnish-like smell but quickly mellows into a typical conifer scent. It’s a little deeper, darker, and woodier than the needle oil, but otherwise similar. Oddly enough the needle oil lasts longer than the fir cone oil. After 8 hours, the needle scent is still there, but the templin has long since faded. Interesting.

Siberian fir, Abies sibirica, is the Eastern European fir that grows on the mountains and taiga along with larches and other conifers. The essential oil, presumably from the needles, comes from Russia. It starts out camphorous, woody, and Christmas-tree sweet, with hints of tarragon and raw bread dough. As it dries down, the scent becomes fresh, almost like spearmint, but always with the woody-balsamic evergreen base. It only lasts an hour or do, but it makes a nice top note.

Like pine scents, fir fragrances are quite diverse depending on species and how the aromatic material was extracted. I can imagine that balsam fir absolute diluted with the essential oil of the same species would make a fine addition to almost any perfume with evergreen notes, and I imagine that it would last through to the base. I was surprised that silver fir essential oil lasts so long that it could be used as a heart note, so diluting balsam fir absolute with silver fir essential oil might work even better. I’m looking forward to working with some of these newly acquired evergreen conifer materials.

[All fir photos from Wikimedia]
Posted by Doc Elly at 12:59 PM