HAPPY WINTER SOLSTICE - OR THE END OF THE WORLD?

Today is a turning point of some sort. It’s the shortest day of the year, a day when we instinctively light fires and gather with friends to eat, drink, sing, play music, and hope that the sun will do what it’s supposed to do and come back up from its sinking path toward the southern horizon. According to the astronomical charts, it will hang in a limbo of darkness for a few days, with sunrise continuing to come later each day, but sunset also coming later by about the same amount. By Christmas, on December 25, the days start to grow longer by a tiny bit, and by New Years, on January 1, they’re probably enough longer to notice. How nicely the European holidays fit the extreme northern hemisphere seasonal changes! 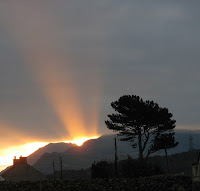 Just as each negative act is, in itself, inconsequential, so is each positive act. Planting a tree instead of cutting one down does nothing to stop deforestation; vocally opposing the construction of more strip malls and parking lots and lobbying for efficient urban planning seems like crying in the wind; drinking water from the tap instead of from a disposable plastic bottle seems like a futile economy; walking or taking public transportation whenever you can doesn’t stop global climate change; speaking out for peace, justice, and tolerance seems like a quixotic tilting at the windmill of the military-industrial-power complex; one family limiting reproduction to one child per person won’t stop exponential population growth. Each act by itself is a grain of sand, but if enough of these positive acts accumulate, they have the power to stop the landslide into earth’s destruction by the parasite that is collective humanity.

Maybe we are at the end of one era and the start of a new one. It is up to each of us to decide which scenario it will be.

[Photos adapted from Wikimedia]
Posted by Doc Elly at 10:08 AM

Labels: ability of individual to bring about change, end of the world, role of individual in collective well-being, winter solstice