CARDAMOM: LOVE IT OR HATE IT 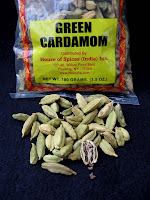 My recent post about a perfume I’m working on, Café V, raised in my mind the issue of why the scent of cardamom is so aversive to so many people. To me, it’s just the delicious spice that’s put in chai, sweets, and sometimes coffee, to enhance its flavor.

Cardamom (or cardamon, as it’s sometimes spelled) is a plant related to ginger, and native to India. The part that’s used for spice and to make essential oil for perfumery is the seeds, which come in three double rows of small brown or black seeds with a shape that’s somewhere between a sphere and a cube, tightly packed in a woody pod. 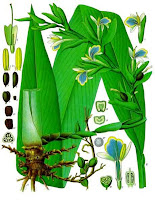 There are two different genera of plants known as “cardamom”. Elettaria cardamomum, which is called “green cardamom”, “true cardamom”, or “cinnamon palm”, is native to India, and is the commonly used spice, also known as “elaitchi”. Amomum, also called “black cardamom”, is native to other parts of Asia and Australia. I’m not sure I’ve ever encountered the black variety in a spice shop, but will have to check my local Indian grocery and see if they have any. “White cardamom” is just the green cardamom pods that have been heat-treated and bleached to make them look cleaner. 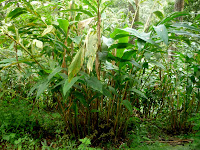 The cardamom plant looks like a giant ginger plant, or an odd sort of palm, growing to 15 feet tall. It flowers with long stalks of light green and violet flowers that develop into the seed pods. Apparently it can be grown as a house plant, although I’m sure it prefers growing outdoors on a cardamom plantation in nice tropical weather.

In cooking, cardamom is used as a flavoring in chai and coffee, in many different Indian sweets and curries and, oddly enough, in Scandinavian baked goods. I think maybe the reason why most Americans and Europeans dislike cardamom in perfume is because it’s unfamiliar. Maybe it smells like a weird form of cinnamon or cloves. It’s a lot sharper, more resinous, and aromatic than cinnamon, and a lot more complex than cloves, without the smoky aspect of cloves.

I’ve used cardamom in small quantities in Kyphi and Gujarat, but in those compositions there’s so much else going on that the cardamom just blends into the general mix and probably can’t be identified. When I used it in Café V, it was a principal note, so people picked up on it. I like cardamom better than cinnamon in perfume, but that’s just my own preference. I certainly like cardamom better than cinnamon in coffee and tea. I would almost wear cardamom oil alone as a perfume, but I can imagine that it would not be well-received by all who encountered its sillage. Others would just wonder, “Where’s the chai?”.

[Cardamom plant and botanical illustration from Wikimedia]
Posted by Doc Elly at 12:10 PM