Many aroma chemicals are just chemical building blocks that are not particularly attractive on their own, but play a key role when combined with other things. It’s strange how, after working with them for a while, I can smell their potential roles even though I don’t like their odor when they’re on their own. This makes sense when you think about the fact that each aroma chemical is a single molecule, unlike natural materials, which are usually “cocktails” of many molecules. However, once in a while there’s a single molecule that has all the character and richness of a natural cocktail. I just discovered two of these amazing creatures.

They were both in a batch of new aroma chemicals that I purchased recently. One of them was so compelling that I’ve already worn it as a perfume on its own. Here they are: 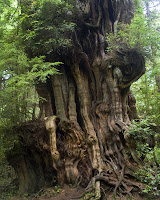 Norlimbanol (aka timberol) is like the best woody cedar-type fragrance you ever smelled. It exudes aromatic woodiness taken to exponential levels, but it also has a rich, sweet undercurrent to it. Others who have written about it describe it as “dry”, but I don’t find it particularly dry. If I didn’t know it was an aroma chemical, I would say it was a perfume in its own right, just as essential oils and absolutes are perfumes in their own right. I’ve tested it on a paper strip and found that it stays fairly linear and lasts for over a month. As a woody scent, it’s not surprising that it would function as a base note. I liked the paper strip so much that I used a tiny dab as a perfume and - wow! It’s fantastic. It not only provides a long-lasting aromatic woody scent, it actually changed on my skin, becoming richer, sweeter, and almost musky over the course of the day. I’m in love with norlimbanol, and can’t wait to use it in a perfume.

Paradisamide smells just like fresh passion fruit (maracuya) and guava. It’s not only a tropical fruity scent par excellence, but -- get this -- it’s a base note. On paper it lasts for over a month, changing very little during that time. I haven’t tried wearing it as a stand-alone perfume yet, but that’s definitely on the agenda. I can see using this in composing tropical fragrances, including some based on orchid flower scents. The possibility of having a fruity scent that lasts throughout the evolution of a perfume opens up a host of interesting possibilities. 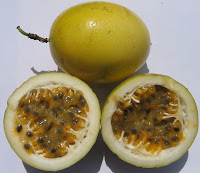 If you’d like to sample these two scents, leave a comment. I’ll have a drawing for two sample sets of norlimbanol and paradisamide, diluted to perfume concentration. Also, stay tuned for the announcement of the winners of the Cleaning Frenzy Drawing this Sunday.

[Tree and fruit photos adapted from Wikimedia]
Posted by Doc Elly at 8:46 AM