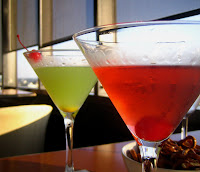 This recent article on natural perfumes was brought to my attention by Dee Howe on Botoblog. Overall it’s quite a good write-up on the use of natural materials in perfumery, but I was struck by a quote in the article stating that natural perfumes, unlike synthetic perfumes “are not a cocktail of chemicals”. I did a double-take on this one. If natural materials are not chemicals, what are they? Some sort of magical ether that contains no molecules at all?

There seems to be widespread misuse of the term “chemicals” as a pejorative when, in fact, everything in nature is made up of chemicals. Every molecule, natural or synthetic is a chemical. Our bodies are complex collections of chemicals. The food we eat is nothing but chemicals. The plants that grow in the wild and in our gardens are sophisticated aroma chemical factories that produce odors to attract pollinators to their flowers. On the flip side of the coin, their vegetative parts often produce chemicals that repel, disable, or even kill pests.

Many of those attractants, repellents, and insecticides are exactly what our own noses find attractive. It’s tempting to speculate that, historically, plants with pleasant odors have been domesticated, thereby increasing their chances of survival in a world where more and more of wild nature is being destroyed by an exploding human population.

I sometimes feel like the odd perfumer out, standing in no-man’s-land in the pitched battle between two opposing camps of extremists. On the one side there are those who advocate aroma chemicals for their “purity”, “reproducibility”, “hypoallergenic properties” and all of the other virtues attributed to chemicals made in factories. On the other, arguably more vocal, side there are those who advocate the use of nothing but natural materials, simply because they are mysteriously produced by plants (or in some cases, animals, but that’s a different issue).

The truth is that toxic chemicals are made both in factories and by plants. Helpful chemicals are made both in factories and by plants. Some of the aroma chemicals made in factories are the same molecules as those made by plants. Most essential oils, absolutes and tinctures that are lauded for their simplicity and “purity” are actually cocktails of dozens or hundreds of different molecules (i.e., chemicals). In fact, that’s what I love about natural materials. They are cocktails with a richness of fragrance and a “personality” that’s not often found in synthetic molecules. Give me a good cocktail of chemicals like an aged olibanum, Mysore sandalwood, Bourbon vanilla, coffee absolute, kewda attar, rose de mai -- or even a good mojito -- and I’m a happy perfumer!

[Cocktail photos all adapted from Wikimedia]
Posted by Doc Elly at 8:18 AM