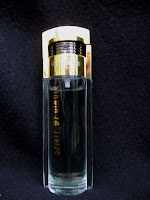 Some time ago I acquired an odd bottle of perfume from a person who was selling off some items she no longer wanted. I had never heard of “Spirit of Gingle” and my attempts at research on it turned up absolutely nothing, so of course curiosity got the better of me and I sent off for it. It’s a 1.7 oz cylindrical clear glass spray bottle with gold lettering and gold colored trimmings at the sides and top, including a disc-shaped cover that swings aside for spraying. The juice inside is a light blue-lavender color. It says it was made by a company called Gingle, in Paris.

I finally got around to trying it the other day, and found that it features citrusy aldehydes, a nice fruity tobacco note, the standard harsh commercial woody base, and some generic fruity-floral notes. It smells vaguely like Givenchy Hot Couture, which I just happened to sample a few days after trying Gingle. Somehow, it seems that randomly sampled perfumes often come in serendipitous groups. Spirit of Gingle is nothing really special, but it’s not bad, either. It’s certainly wearable, and it’s definitely a curiosity.

If anyone out there knows anything about this obscure perfume or the company that made it, I’d love to hear from you!
Posted by Doc Elly at 8:30 AM