Late last month I had to go to the fabric store to buy some cloth to cover a prop I was making for an upcoming show. I hate all fabric stores with a passion. There’s no need to go into details except to say that the fabric cutting and checkout system always seems to move in slow motion and is highly bureaucratic. I don’t do well dealing with the bureaucratic mentality in any form, and I really don’t want to lounge around at the fabric cutting counter holding my number, waiting for the cutters to discuss with a semi-conscious customer which tiny floral pattern will look best next to another tiny floral pattern on a quilt, slowly comparing one piece of cloth after another without anything actually getting cut, all the while nearly choking on cinnamon fumes.

Speaking of cinnamon fumes, before even entering the store I was assaulted by the strongest cinnamon odor I’ve ever smelled - much stronger than real, pure cinnamon. I thought the management must be pumping cinnamon scent into the store, so I asked one of the women who worked there what the cinnamon smell was. She replied, “Oh, it’s just the pine cones. It would be too expensive to use cinnamon scent”. Pine cones? Since when do pine cones smell like supercharged cinnamon? I asked another person who worked in the store if she noticed the in-your-face smell of cinnamon, and whether it bothered her at all. She replied that she hardly noticed it, but when she came in to work in the mornings it made her feel as if she had a lot of energy. She assured me that the cinnamon scent came from “the pine cones”. I probed a bit further and found out that there were bags of ponderosa pine cones stacked in the area between the two sets of doors at the entrance, and these were the source of the scent. 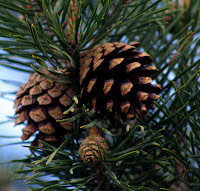 Sure enough, the pine cones were right there in the entry lobby, in net bags, exuding a powerful artificial cinnamon odor. I suppose they had been soaked in cinnamon scent, but why? Ponderosa pine cones have a lovely scent of their own, subtle though it is. A few dozen bags of these cones scented the entire large supermarket-size store, even though they weren’t technically IN the store. What would a whole bag of cones do to a small house or apartment? Kill bedbugs?

I suppose the idea is to buy a bag of cones and place them in strategic locations to promote a holiday-like atmosphere and attitude through continuous inhalation of cinnamon. Welcome your guests with a blast of cinnamon coming from an innocent-looking little pine cone! Inspire your family to purchase mass quantities of retail goods through constantly inhaling cinnamon scent! Sell your gigantic foreclosure-prone house by fumigating it with cinnamon pine cones!

In all fairness, the pine cones are probably meant as Thanksgiving or Christmas decorations, so when they’re delivered to the stores in early October they have a while to go before being sold and used for their intended purpose. In the meantime, maybe the cinnamon scent will be reduced to a pleasant level, but wow! Like the agarbatti scent that permanently invades every item bought in little Indian clothing shops, cinnamon is probably going to be a signature scent that permeates every item sold by this fabric store for the entire coming year.

What do you think about holiday-theme ambient scents? Do you enjoy them? Do you use them? What are your favorites and least favorites? Do they influence your attitudes and behavior?

[Pine cone photos from Wikimedia]
Posted by Doc Elly at 8:35 AM