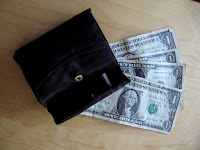 After going through a slump this past summer and fall, I’m starting to get excited again about the projects that I left on the drawing board in sketch or outline form.

Last summer I wrote about my idea to make a limited-edition scent based on paper to celebrate the first anniversary of Olympic Orchids Perfumes. I kind of forgot about it during the time surrounding my mother’s death, but I was reminded of it again when I was simultaneously sniffing a newly-acquired material that I was testing, and going through some of my old files. When I have ideas, I usually write a brief to myself in the little notebook that I always carry around. Sometimes I transcribe them to my laptop, and this time I had done so.

We all could use an infusion of cash into our bank account, but this is a different kind of infusion - the scent of money. It’s the papery fragrance of a well-worn dollar bill (or 5,10, 20 or more, they’re all alike, recent attempts to tint the green rectangles with pink and peach notwithstanding!). The paper, with its own characteristic smell, is infused with the scent of leather wallets and purses, musky pockets, tobacco, a hint of cheap and expensive perfumes, and the thousands of mysterious places that the tough little piece of paper has visited. Now grind up some greenbacks and tincture them to extract their scent - not literally, but in theory. The result would be called “Infusion d’Argent”.

What better paper to be inspired by than old-fashioned banknotes? Euro banknotes smell similar to US ones, but not as strong. Maybe they’re not as absorbent, or maybe they’re all newer than the oldest dollar bills, which have been knocking around for quite some time. I suppose purse and wallet perfumes have been done before, but hasn’t everything?

At this rate, I’ll always be behind by one year, but maybe I can double up at some point. The idea is that the perfume would be a limited edition, released in July of one year, and sold for a year from the release date. As soon as I finish a stack of writing tasks that I have to do for my “day job”, I’ll get started on it!
Posted by Doc Elly at 8:48 AM